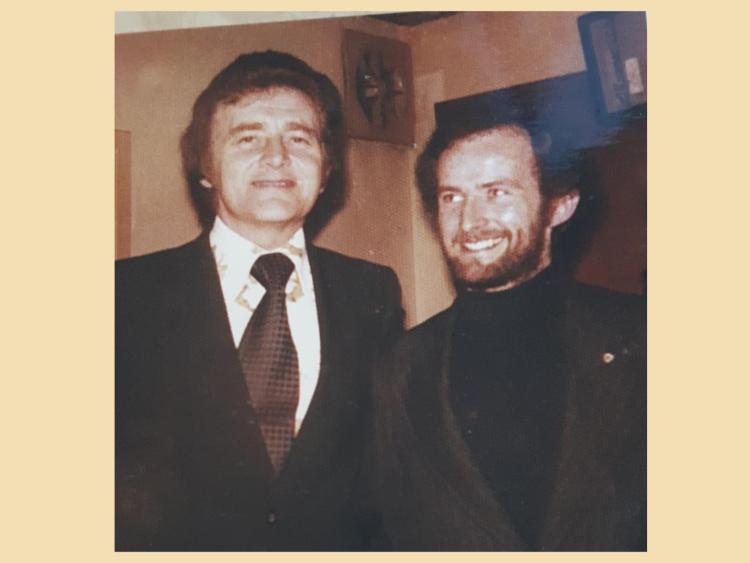 The late Larry Gogan (left) pictured with Longford DJ Oliver McNerney (aka Ollie Muldoon, now based in Australia) at a Longford Leader music awards in the 1970s at the the Longford Arms Hotel

Roscommon/Galway TD Eugene Murphy has praised the late legendary RTE broadcaster Larry Gogan for providing a platform for so many young emerging artists.

Deputy Murphy extended his sympathies to the family of the late Larry Gogan whom he described as a ‘broadcaster who was respected throughout rural Ireland.”

“Larry Gogan was a legend throughout Ireland and was particularly popular with radio listeners in rural Ireland. I was fortunate enough to meet Larry Gogan on one occasion during my twenty years working as a former radio presenter and producer. The respect that Larry had for all genres of music was a tribute to the man’s sense of fairness. Whether it was country, rock or trad, Larry would always spin the discs- he was without doubt a legend and a most valuable asset to RTE,” said Deputy Murphy.

Also read: 'The nation has lost a skilled broadcaster': Marian Finucane is laid to rest in Kildare

The Fianna Fáil TD praised the late Larry Gogan for always giving newcomers a chance and giving a voice to so many young and emerging artists.

“Larry was a national voice for country music for many years. In some respects, many artists could not get a play on national airwaves if it were not for Larry Gogan. He was a very genuine and lovable character who will be missed by many radio fans and colleagues throughout the country of Ireland and indeed further afield."

Also read: Eight dogs rescued from 'squalor' by ISPCA in need of a home