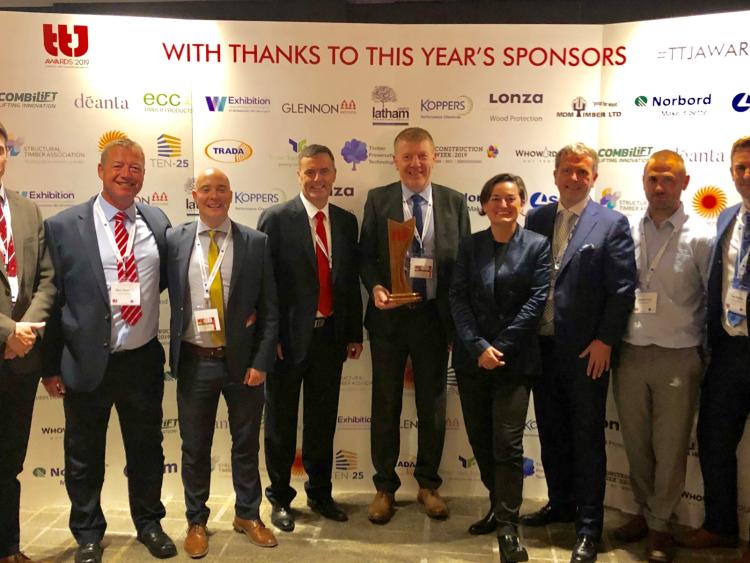 Glennon Brothers have won the ‘Softwood Trader of the Year’ Award in London, the Timber Trade Journal’s most coveted award. The TTJ Awards are widely seen as the most prestigious in the timber sector.

The £14 million biomass Combined Heat & Power (CHP) plant, was recognised as an investment project that has led to a significant improvement in production efficiency. Completed in 2018 in the Troon facility in Scotland, the plant produces 2.5MW of electrical power, sufficient to supply the entire site, with surplus energy being exported to the UK national grid.

Mike Glennon, joint Managing Director of Glennon Brothers said; “We are absolutely thrilled to win the prestigious Softwood Trader of the Year Award, particularly in such a highly competitive market.

“I’d like to sincerely thank our customers for voting for Glennon Brothers, and for their continued support and faith in us.

“Over 500 families in the UK and Ireland, depend on Glennon Brothers for their livelihood. On their behalf, I would like to say a big thank you for your business.”

“We are very fortunate to have such a great team. Thanks to everyone in the business, who strive to deliver high quality products and excellent customer service from forest to front door.”

Published in the UK for nearly 140 years, the Timber Trades Journal (TTJ) is one of the most widely respected magazines in the timber sector. With a core readership of timber importers and distributors, the TTJ coverage ranges from forestry, production, distribution and end user markets.

As a result of this, organisations and businesses sponsor the prestigious annual TTJ Awards, recognising the achievements of the Timber Trade Industry. The 23rd TTJ Awards took place at the Hilton Bankside Hotel, London, where UK stand-up comedian Zoe Lyons, hosted the event.