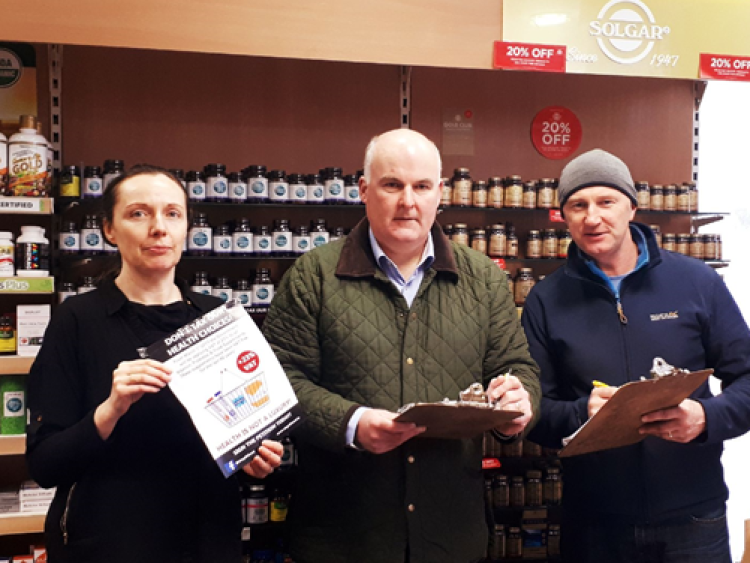 Fianna Fáil General Election Candidate for Longford, Cllr Joe Flaherty has said the proposed 23% VAT increase on food supplements is effectively a tax on people’s health. Cllr Flaherty was commenting as he signed a petition in Golden Health Store in Longford Town, calling on Minister Donohoe to intervene to stop the increase.

Cllr Flaherty explained, “Over 300 locals have signed the petition along with another 20,000 nationally, which goes to show the opposition that exists to this ridiculous tax hike. There is little more than two weeks left until the tax is due to be introduced on March 1st and businesses such as Golden Health Store  are wondering how they will cope.

“Revenue announced these plans late last year despite the Junior Finance Minister, Michael D’arcy, saying the Tax Strategy Group would be examining the proposals on food supplements, and a decision would be taken after they had published the review in the summer.  I find it hard to understand why these changes are being made in advance of the publication of the review, surely it makes more sense after it.

“Aside from the negative impact on businesses the impact on individuals and families will be immense. The majority of people take these food supplements in a bid to live healthier lives, and any increase in the cost of them could see people forced to give them up.  At a time when the cost of living is already high, a 23% tax increase on food supplements could push them out of reach for many families.

“Along with my Party Spokesperson on Finance, Michael McGrath, I have called on Minister Donohoe to halt the tax hike until the impact of the increase can be fully examined by the expert group” concluded Cllr. Flaherty