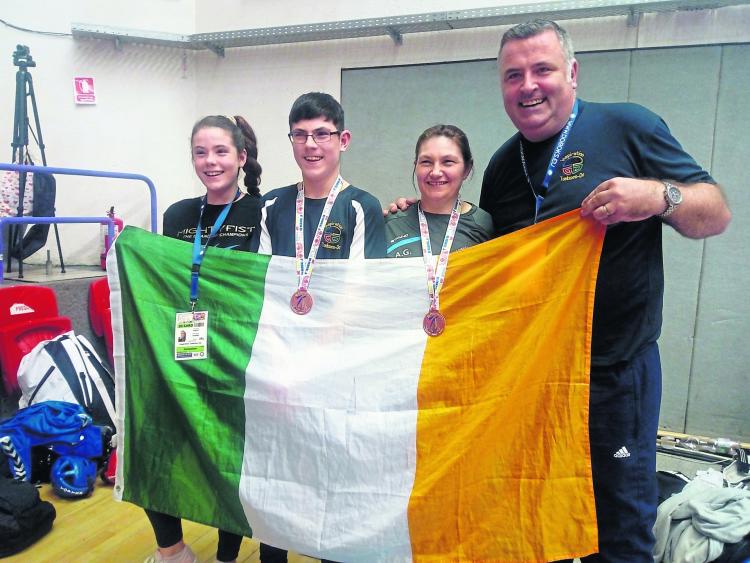 Darragh, participating in the 14 - 17 years category, captured a bronze medal.

He won his first round encounter against a Polish opponent in patterns, before being knocked out.

In sparring he overcame opponents from Poland and Belarus, winning the bronze medal, before being eliminated by Moldova in the quarter finals.
His sister Niamh competed in the children's section that featured almost 800 competitors. She battled bravely but was unlucky not to figure among medals.

Their mother, Anne, competed in the 18+ section and she also won a bronze medal for sparring.

Next month, Darragh, will be hoping to achieve his black belt.
The family are also competing in the Irish National Championship in Limerick later this month and best wishes to them.

In 2017, Darragh and Niamh Grehan both competed in European Cup at Lublin, Poland.

While a year earlier, Darragh was at the World Cup in Budapest. On that occasion, he got through three rounds of sparring to get to the last 16 in his group.

The Grehans joined the Inspiration Taekwon-Do group in Westmeath in 2013 and they say 'it has been the best decision we have made as a family'.

Extending thanks to Rodney Connolly (Instructor) and Bryan Mahon (Sparring Coach) for their dedication, the Grehans said, “They inspire us every day with their commitment. Countless hours are spent training and the hard work is starting to pay off.”

The Grehans have competed in many tournaments, both at home and abroad.