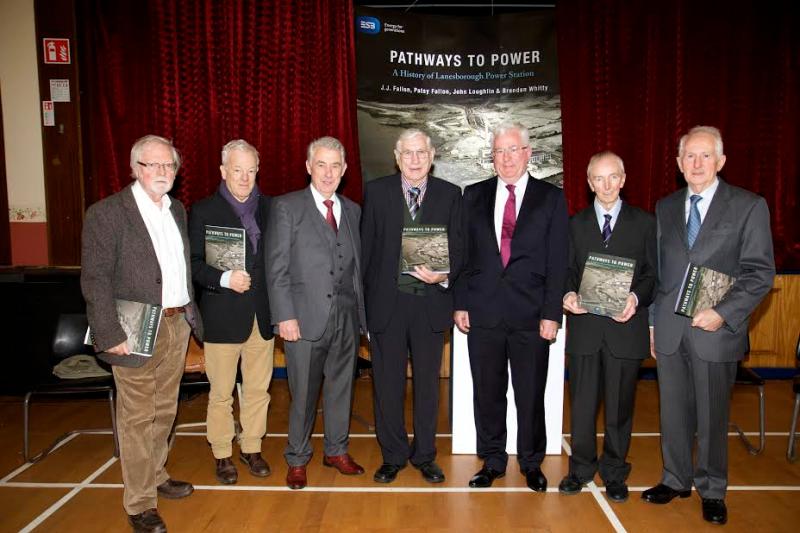 Launched by ESB’s Archives, authors JJ Fallon, Patsy Fallon, John Loughlin and Brendan Whitty recount the integral role of the station in the community since it was first opened in 1958, through to the decommissioning of the old station in 2004.

The book records and celebrates the contribution of successive generations of staff through those years and how it was designed to help reduce Ireland’s dependence on imported fossil fuels in the wake of World War II.

“At its peak in the 1980s and 1990s, Lanesboro had a generating capacity of 85 MW, and was considered to be the most cost effective and efficient peat fired electricity generating station in Ireland,” Jim Murray, Manager at ESB’s Midlands Stations told those gathered.

“Over its 46 year lifetime it employed about 500 people and used both sod and  milled peat to generate electricity producing enough electricity to supply the power needs of 35,000 homes each year.”

He went on to say that it was “wholly appreciated” on occasions like today, that the opportunity be taken to pay tribute to all those who worked for both ESB and Bord na Móna. “Let me congratulate all the successive generations of staff and their families and those involved in the publication of this book which records their story, a story that deserves to be told,” Mr Murray continued.

“The current 100MW generating station on the site, commissioned in 2004, has continued to harness Ireland’s indigenous natural resources for power generation, and planning permission for conversion of the station to transition to sustainable biomass in the next decade are at an advanced stage.

“This will allow the plant to continue to support the regional economy, local jobs and contribute to Ireland’s security of clean energy supply.”

Meanwhile, while launching the book, Jack Harte, local author and historian said the publication was “eminently readable and hugely enjoyable”.

“If you have the time or opportunity to read this book I heartily recommend it,” he smiled, before pointing out that there was a wide variety of material covered in the recounting of the station’s history over forty six years from many contributors all from different backgrounds.

“The book encapsulate and forms a social record of both events and people which helped shape modern Ireland.

“Reviewing this book on the station’s history leaves me with a sense that we can and should learn from a previous generation who despite living through tough times had the ability to manage such an innovative and major project.”