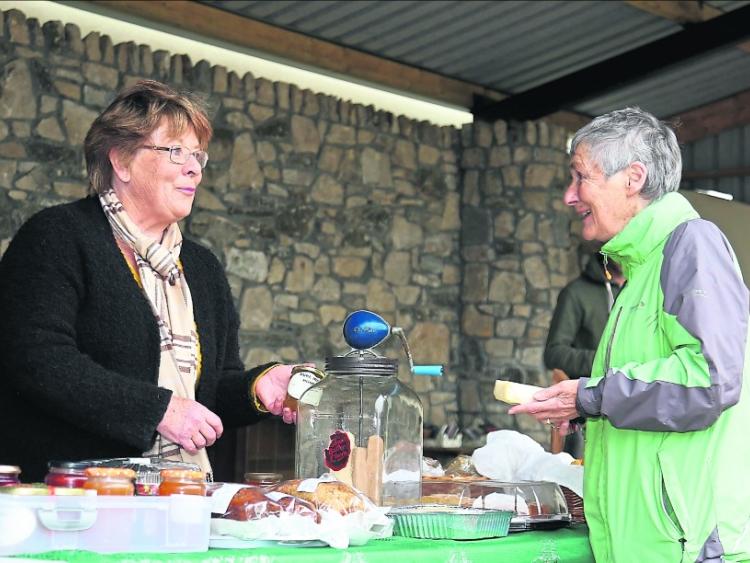 There they are standing around full of chat, All eyes of the precious light of butter.
A strip of muslin, butter’s cast-off clothing, darts about in the wind.
A merchant lifts the lid of a firkin to get his taste buds going, men complain about prices, stare at the widow’s daughter.
The old buttermarket said what it meant: Butter roads are never paved in gold.
The iron gates slammed shut.

A few lines from the poem ‘Buttermarket’ by Granard poet Noel Monahan, which sums up the significance of the venture and the fact that this week it celebrates its first anniversary in the north Longford town.

Following major refurbishment works, the facility was opened last year and became home to the former country market, which is now bigger and better than ever before.

Speaking to the Leader on Sunday where trading was brisk to say the least, organiser Helen Donnelly said plans were already in place to create an eco friendly space at the Buttermarket.
She also pointed out that it provides opportunities for local people to showcase both themselves and their skills in a unique and special way.

“Two years ago this was a derelict site and now we have a vibrant trading space,” Helen smiled before pointing out that local man Seamus Ross was responsible for all the beautiful stone work at the site.
Meanwhile, Ita Creegan and her daughter Allanah provide homemade apple tarts, buns and brown bread, while Shane Gettings sells free range eggs; Maggie Small has a flower stall at the Buttermarket and Angela Durkin produces her own honey and makes homemade butter.

“I provide honey here at the Buttermarket - we are beekeepers; I also have white and brown scones; I have a footpress to make butter,” Helen said before pointing out that she had previously been involved in the country markets.
“The butter is sold out now - people really like it; I have a passion for all this and love baking.”

Minister for Rural & Community Development, Michael Ring TD also sent a letter to the committee this week commending all of those involved with the Granard Buttermarket.

“One year on from its opening, the food market at the Buttermarket has established a reputation as a great source of locally produced food and treats, and the facility is becoming a real hub for community activity in the town of Granard,” the Minister added.

“I am delighted that my department was able to provide the funding to restore the Granard Buttermarket and it was an honour and a pleasure to officially open it last October.

“I have great memories of the day."