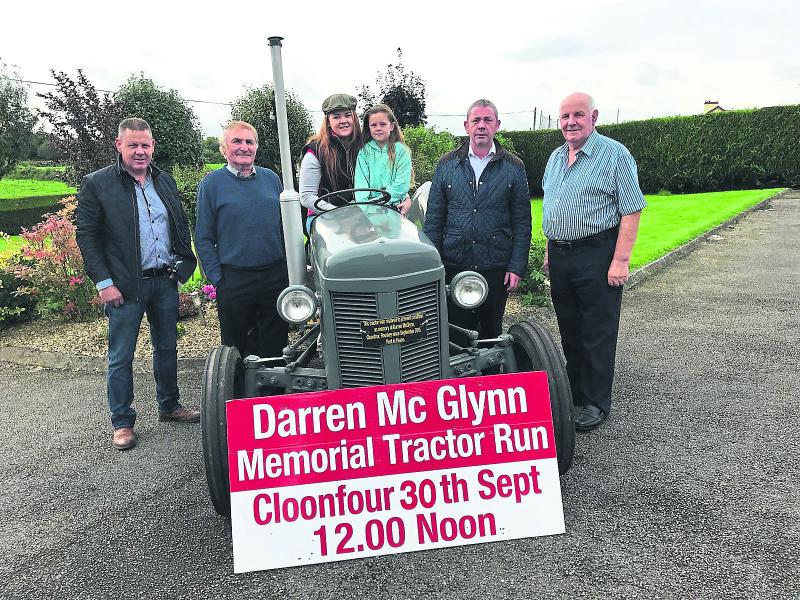 Plans are well advanced for the 4th and final running of the Darren McGlynn Memorial Tractor Run, which takes place on Sunday, September 30.

Plans are well advanced for the 4th and final running of the Darren McGlynn Memorial Tractor Run, which takes place on Sunday, September 30.

The event takes place from the McGlynn home in Cloonfour, midway between Tarmonbarry and Rooskey, and is open to both vintage and new tractors.

The Run starts at 12 pm, and tractors will travel in convoy along a 35km route, starting and finishing at the McGlynn family farm in Clonfour, and passing through Tarmonbarry, Strokestown, Kilglass and Rooskey. The monster prize draw takes place after the Tractor Run, and tea and refreshments will also be served.

This is the fourth running of the Darren McGlynn Memorial Tractor Run. The event was the brainchild of Claire McGlynn, and is named after her late brother Darren, who died in a traffic accident in 2014.

This year the event is being ran in aid of The Hub Community, based in Strokestown Co Roscommon, and the Co Longford Scuba Divers/Search & Rescue.

"While it’s hard work, we get great help from the whole community. We were going to finish after last year’s event, but so many people were asking about it we decided to give it one more go for 2018. We couldn’t do it without the great team of stewards, caterers, and helpers of all sorts, including Ventura Marquee Hire who kindly provide us with a marquee every year.”

Claire is especially excited about the prize draw, running in conjunction with the Tractor Run. “We’ve had really great prizes sponsored this year, including a trip for two to New York, a Charolais Heifer, a €500 voucher , and a weekend away. Tickets are selling well, so we hope to raise a lot of much needed funds for our charities this year.

“In addition to the draw, we have an auction, the star lot in which will be a restored Ferguson Diesel 20 tractor, that was generously donated by our neighbour, Chrissie Cox. We auctioned the tractor in 2015. Chrissie’s son Dermot restored it, and now Chrissie has donated it back to us for auction.

The Cox family, and the staff at Cox’s Steakhouse Dromod, have been among our biggest supporters since the Tractor Run began, and we are very grateful to them for their generosity.”

Entry to the Tractor Run is €20 per tractor.Donations can be made directly to Bank Account 20917721 Sort Code 90-53-36, and more information can be found on the Facebook page of The Darren McGlynn Memorial Tractor Run.