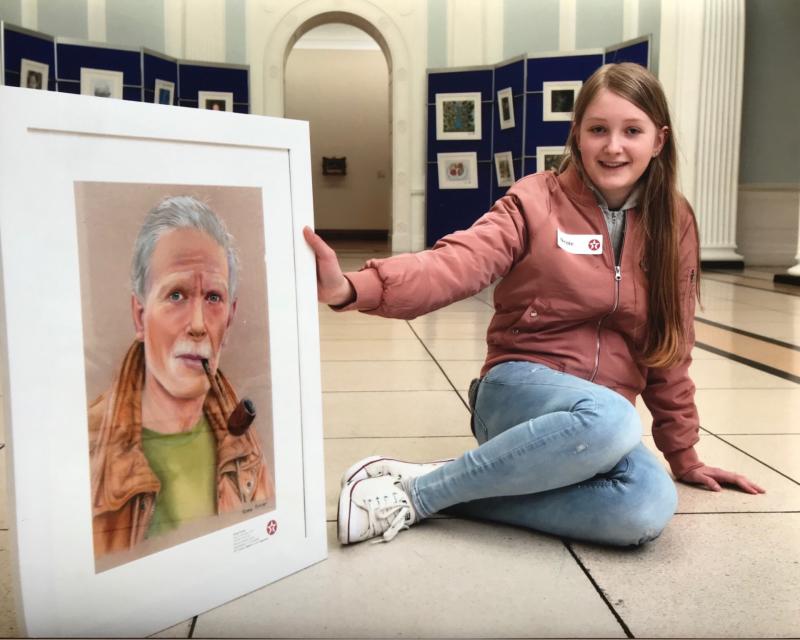 Nicole Forster with her artwork entitled 'Portrait of my Dad'

Longford has reason to be proud of its creative reputation this week following success from a number of young artists in this year’s 64th Texaco Children’s Art Competition. 16-year-old Nicole Forster from Ballinalee, Co Longford received a letter of commendation for her artwork in category A entitled ‘Portrait of my dog Whiskey’.

Nicole, a student of Wilson's Hospital School, Multyfarnham, is not unfamiliar with success in the competition as she was awarded 1st place in category C at the 61st Texaco Children’s Art Competition in 2015 for her artwork entitled ‘Portrait’. The following year, the then 14-year-old was awarded Special Merit in category B for her piece entitled ‘Roses’.

Nicole’s most notable success however, came in 2017 at the 63rd Texaco Children’s Art Competition where she was awarded €250 for 3rd place in category B for a painting entitled ‘Portrait of my Dad’.  The portrait has been chosen this year to feature in an exhibition in one of Japan’s most highly regarded galleries, The National Arts Centre in Tokyo.

Approximately 400 artworks had been selected from a total of 11,000 pieces that were submitted from students from representing nations across the globe. Five artworks were then chosen from these to represent Ireland, Nicole’s painting being among the chosen few.

We would like to congratulate Nicole on her fantastic achievement. The exhibition will be held from Wednesday, August 8 until Sunday, August 19 2018. Nicole’s artworks are available to view on her social networking sites Twitter and Instagram at @forster_art.