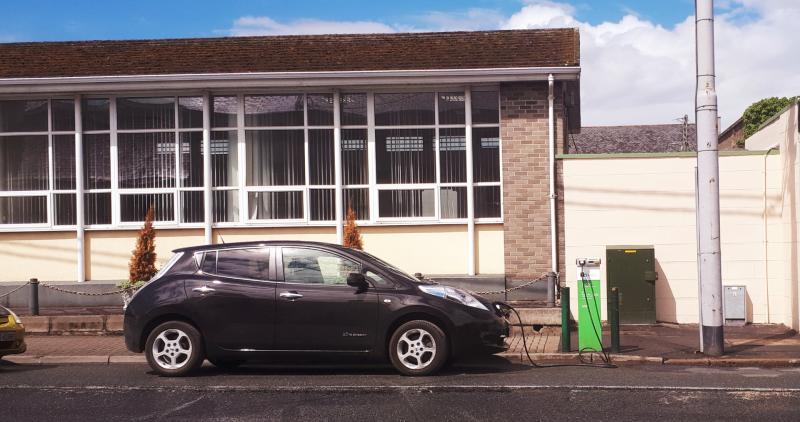 A car photographed recharging at the electric vehicle recharging point at Church St in Longford town this week. Its one of three such facilities in the town with the other two located at the rear of t

Cllr Joe Flaherty has called on Longford Council to address an anomaly where the county will soon be the only one outside Dublin city, with parking charges, whilst electric car owners, are recharging their vehicles.

Cllr Flaherty says that from September, Limerick City Council will no longer impose parking fees on electric vehicle users when they are charging their cars up to a maximum of four hours.

“That means that Longford will be the only Council outside of Dublin City centre to impose parking fees and not promote the current government's environmental policy,” he added, before pointing out that there were currently three charge points in the town with one on Church St and another two on the Market Square.

“At the moment, electric car owners technically have to pay their parking charges whilst they recharge their car, but I do appreciate that the local traffic wardens are correctly using their discretion.

“It’s an anomaly that simply needs to be cleared up; we are all well aware of the benefits of electric vehicles and in line with  the Government's aim of encouraging the electrification of transport, it is important that we as a local authority are on point with stated national policy.”

Meanwhile, the use of the electric vehicles is being widely supported by the Sustainable Energy Authority of Ireland and according to Cllr Flaherty there were 3,800 electric vehicles (EVs) on Irish roads by the end of 2017 but registrations of new and imported EVs are currently up by 40% compared to same period last year.

The local area representative in Longford town also highlighted grants for motorists or businesses who might be thinking of going electric and suggested a visit to the very informativewww.DrivingElectric.ie

“At present, electric vehicles make up less than 1% of the vehicle fleet in Ireland but there is a marked shift in this direction,” said Cllr Flaherty.

“I appreciate that the local wardens have been exercising discretion but we need to clear up any ambiguity and if that means addressing the town's parking bye-laws then that's the route to go.”