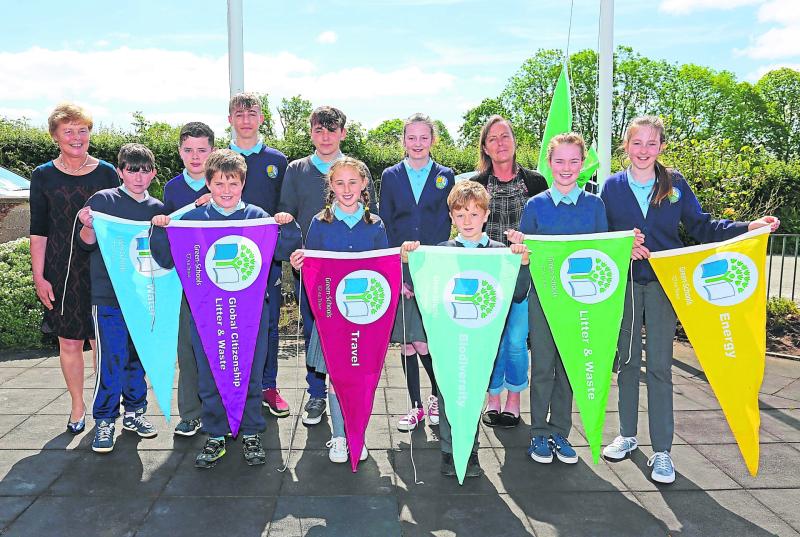 This is the school's seventh Green Flag Award, the previous including Litter and Waste, Water and Biodiversity.

The pupils, parents and faculty have done admirable work throughout the year to win this award.

Actions like gardening, conducting surveys in the community, walking, cycling and carpooling to school, doing projects on Global Warming, Fairtrade and the United Nations and performing plays about Global Warming all contributed to the Glen school earning the Green Flag.

The students also had the opportunity to attend the Green School Expo in the RDS in February.

In this school of only thirty-three pupils, everyone worked diligently and enthusiastically. Principal Anne Marie McLoughlin said, "It's great for them, and they're life skills that they'll have forever.

"They're like a big family; everybody knows everybody, all the staff would know the children and their ways. It's like family life."

A ceremony was held to celebrate both the flag and end of the year.

Fr Pat Lennon said mass and complimented the hard work everyone put in. Ms McLoughlin also thanked all those who were involved and bid farewell and good luck to the seven sixth class pupils moving on to second-level education.

Longford Rose and past pupil Loren Katie Logan also attended the ceremony and raised the flag. Loren Katie was a member of the Green Schools Committee and was delighted to help them receive another.

She has been teaching in the school for the past few weeks and helped in the preparations for the Green Flag ceremony, including organising the music.

"It's so gorgeous to help out with another [Green Flag]. It's always a happy occasion.”

This year, Scoil Bhríde has been involved in projects like Incredible Edibles and Discover Primary Science, for which they received a STEM Excellence Award.

In conjunction with Cruinniú na nÓg, the students also painted a school mural with the help of artist Phil Atkinson.