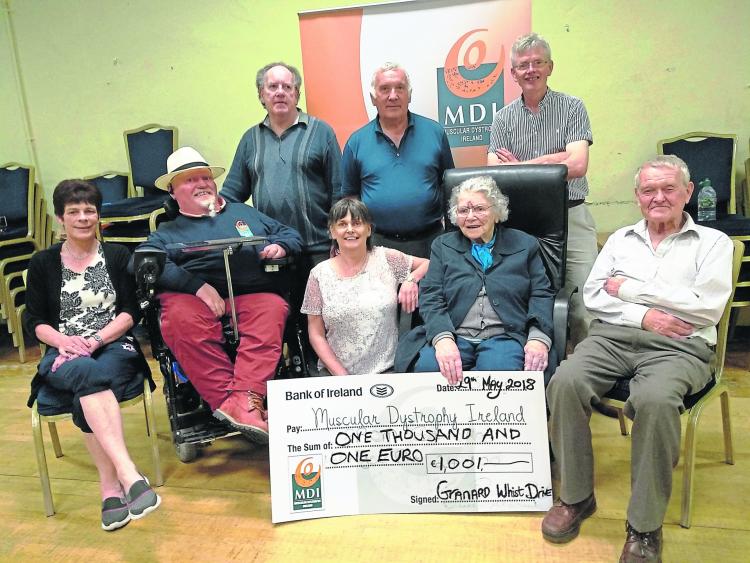 he proceeds from the whist drive were presented to Hubert McCormack from MDI after the event in Granard Community Centre. Pictured left to right are (standing): Gerard Leavy, Paddy Dowd, Martin Coyle

Muscular Dystrophy Ireland (MDI) would like to thank everyone who attended a charity Whist Drive at Granard Community Centre, Longford on Tuesday, May 29 last to raise funds for the organisation.

his is the third consecutive whist drive in as many years, which was held at the request of one of their regular players, Mrs Anne Byrne from Ardagh, who is 102 years young!

Anne will be 103 in July and in 2015, an initial whist drive was held to honour her 100th Birthday, with all proceeds going to MDI at her request.

Anne chose MDI as her nominated charity as her nephew Hubert has muscular dystrophy and works for the organisation.

This year’s whist drive was the most successful to date and raised €1,001 for MDI, a truly amazing achievement/

With over 20 tables on the night, the majority of players travelled from Cavan and surrounding areas.

A great night was had by all who attended and the event has now raised over €2,200 for MDI since its conception in 2015.

The proceeds from the whist drive were presented to Hubert McCormack from MDI.

Mr McCormack commented, “On behalf of Muscular Dystrophy Ireland, we would like to take this opportunity to thank Martin Clyons (Chairman, Granard Community Centre) and all his colleagues for hosting this event.

“We would especially like to thank Maureen O’Hara and all the ladies who helped with teas / coffees and refreshments and Paddy Dowd for setting up the hall. And finally, we would like to thank the people of Cavan and Longford for turning up on the night and helping to make this event a huge success.”

He concluded, “Your support is very much appreciated. All funds will go towards MDI’s Home from Home Apartment and support services.