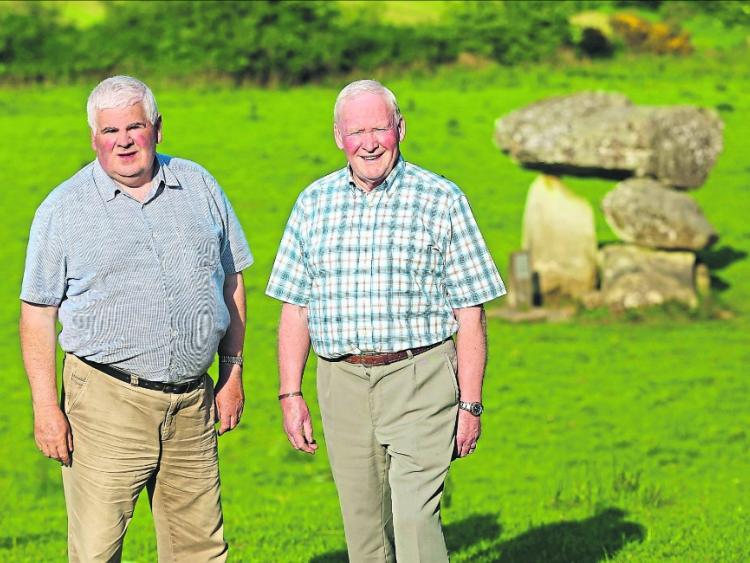 Cathaoirleach Cllr PJ Reilly and Cllr Luie McEntire at the site of the historic dolmen in Aughnacliffe. Photo: Shelly Corcoran.

Dolmen discovered in Colmcille could be over 2,000 years old, a meeting of Granard Municipal District has heard.

Cllr Luie McEntire (FF) told those gathered that it would be important for all the committees in the area to join forces so the historic artefact could be preserved and protected “for future generations”.

Meanwhile, a Dolmen is described as a type of single-chamber megalithic tomb, usually consisting of two or more vertical megaliths supporting a large flat horizontal capstone. Most date from the early Neolithic (4000–3000 BC).

While dolmens are specific to north Longford, they were typically covered with earth or smaller stones to form a tumulus, in many cases that covering weathered away leaving only the stone ‘skeleton’ of the burial mound intact.

“This Dolmen is older than 2,000 years and concern has been raised by people in the area over the fact that while it is a protected monument, it is visited pretty often, but the signage isn’t sufficient in relation to it,” Cllr McEntire told the Leader.

“There needs to be information provided about what the Dolmen is relevant to for example, and I feel that while we know all about it, the next generation will need access to information.

“We need to make contact with the landowner now and find out exactly what their situation would be with regards to the provision of a proper access route to the Dolmen and the continuing preservation of both the monument and the site on which it stands.”

The local area representative in Colmcille went on to say that it has also come to light in recent times that there is another Dolmen which has laid undiscovered for centuries, close to the much loved Leebeen Park.

That Dolmen probably originates from the same time as the one we are discussing and the fact is they are of huge national importance,” Cllr McEntire smiled.

“We need these areas to have signage and information about the dolmens and we also need proper access to the sites - people from all over the world come to see monuments like these.”

Meanwhile, Longford’s Heritage Officer Mairead Ní Chonghaile told those gathered in Granard that the Dolmen was one of just three of four in Co Longford.

“I have spoken to Jim McKeon - the landowner - and he is very passionate about the Dolmen which is considered a national monument and also has a preservation order on it,” she said.

“It remains on private lands, however, it is not under State guardianship and the OPW does have a duty of care towards it.”
The meeting went on to hear that the monument has already been damaged due to livestock, but if the community in north Longford “was of a mind” to ensure its protection, the site would make an ideal visitor’s amenity.

“I would propose - to begin with - putting up signage in Leebeen Park about the dolmens, and from there we will chat with the landowner about ways in which to move forward,” added Ms Ní Chonghaile.

Meanwhile, Cllr McEntire concluded by adding; “We have great committees in Colmcille and I think if we all come together on this, we could get the landowners consent to carry out the necessary works”.