Grandeur and joy in US as Longford bishop celebrates golden jubilee 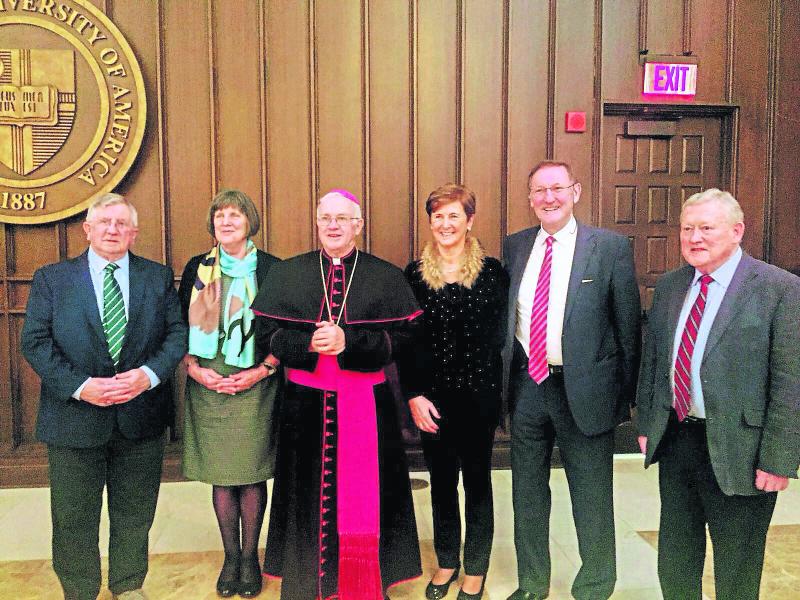 Much of the Irish-American attention around St Patrick's week may well have been focused on Taoiseach Leo Varadkar's visit to the White House, yet there was every bit as much local attention focused on the grandiose Basilica of the National Shrine of the Immaculate Conception in Washington DC.

That was where Longford Town native, past pupil of St Michael's Boys' School and St Mel's College, Bishop Richard Higgins, was celebrating the Golden Jubilee of his ordination to the priesthood in Rome in March, 1968.

Bishop Higgins is now the Auxiliary Bishop in the Archdiocese and Vicar of Veteran Affairs for United States' Military Services. Responsible for over 270 military chaplains throughout the USA, Puerto Rico and Guam, he also serves as the Bishop Protector for the 10,000 members of the Catholic War Veterans of America.

Seconded to Military Chaplaincy from the Diocese of Sacramento in 1974 where he had been working with several Longford-born priests including his Battery Road neighbour,Fr Gerry McNulty and the recently deceased Frs. Ned O'Hara [Lisryan] and Mike McKeon [Colmcille], Bishop Higgins served as Military Chaplain to the US Airforce until his appointment as bishop by Pope St John Paul II in 2004.

A Knight Commander of the Holy Sepulchre of Jerusalem, Bishop Richard Higgins also holds his own Airline Pilot Certificate and several Flight Instructor Certificates - representing an interest in flying which has its roots in Abbeyshrule airfield since his teenage years. A seasoned motorcyclist, he is also the proud owner and rider of a powerful BMW R1100RT machine.
The special Mass of Thanksgiving on Sunday, March 11, was presided over by the Archbishop of the Military Services, USA, Most Rev Dr Timothy Broglio.

Bishop Higgins was himself the Chief Concelebrant with a number of his colleagues including the Bishops of Arlington, Baltimore, Delaware and Philadelphia who had been joined in the solemn procession by over forty priests from all over the United States.

In his homily during the Mass, Bishop Higgin's distinguished career achievements were eloquently described by the former Bishop of Arlington, Most Rev Dr Paul Loverde who laid special emphasis on his family upbringing and early formation in Longford.

Apart from the presence of an impressive number of clergy and other Catholic religious, the ceremony was also attended by a large inter-faith representation and by United States military and civic personnel.

The large congregation was joined by Higgins family members, extended family and friends from Ireland, France, and the United Kingdom as well as from Alaska, Arizona and the East Coast States.

Among Bishop Higgins' long time friends who travelled from Ireland were Brendan and Ann Carrigy, formerly of Granard, Michael and Peggy McNulty from Longford and Catherine and Benny Reid from Aughnacliffe. Brendan and Michael had also attended his ordination in Rome fifty years ago.

The Mass Readings were from Chronicles II and St Paul and were delivered by his brother, John Higgins and by his nephew, Oisin O'Connor.

Gifts were presented by his sister Marie's grandchildren, Emer and Sam O'Connor.
The sacred music for the Mass was beautifully rendered by the Choir of the National Shrine itself and the Communion Meditation 'Panis Angelicus' sung by soprano, Liz Higgins, London.

Before the final recessional hymn, Bishop Higgins spoke briefly and extended his thanks to all who had contributed to what was a deeply inspirational ceremony.

The ceremony in the Basilica Shrine was followed by a reception in the adjoining Catholic University of America where, incidentally, the late Professor Tom Halton [1925-2013] from Cavan served as Professor of Classics for many years.

There, once again, warm tributes were paid to Bishop Higgins by Archbishop Broglio and by John Higgins as well as by a number of senior military and airforce colleagues.

Bishop Higgins is the second son of the late Richard B. and Mary Higgins of Battery Road, Longford.

Dick, as R.B. was affectionally known, was a native of Abbeyderg, Kenagh and served as Chief Assistant County Engineer and also as Chief Fire Officer for County Longford until his retirement in 1970.

Well known for his sterling commitment to both town and county, he was the founding President of Longford Historical Society, founding member of Longford Swimming Club, and, during the WWII years, a Battalion Officer of our Local Defence Force as the F.C.A was originally known.

Several members of her extended family also attended the Washington celebrations over the weekend.

The Higgins family home in Longford is now part of the St Christopher's complex following the passing of Mary in 1988 and of Dick five years later. Grasta o Dhia orthu beirt.

Their sister, Marie, lives in Limerick where her husband, the late Senan O'Connor was also a well known Consultant Civil Engineer in private practice. Sadly, both their younger brothers are deceased.

Frank taught in Moyne Community School before moving to Dublin where he died in 2012.

With Bishops Colm O'Reilly from Colmcille, Vincent Flood OP, from Legan, Joseph Hoare from Ballymahon and James Moynagh from Mullahoran, Dr.Richard Higgins is the fifth illustrious alumnus of St Mel's to have been raised to the episcopacy.

He is still a frequent visitor to Longford and made a very welcome return for the re-dedication of St Mel's Cathedral at Christmas, 2015 as Denis Glennon recalled in his recently acclaimed book on the college.

It was fitting, therefore that on the occasion of his recent jubilee, US Mail carried a heavy bag of congratulatory messages to him from his legion of friends at home in Longford, in Ireland and the far-flung Archdiocese of US Military Services.