Ploughing on regardless at the 84th County Longford Championships launch 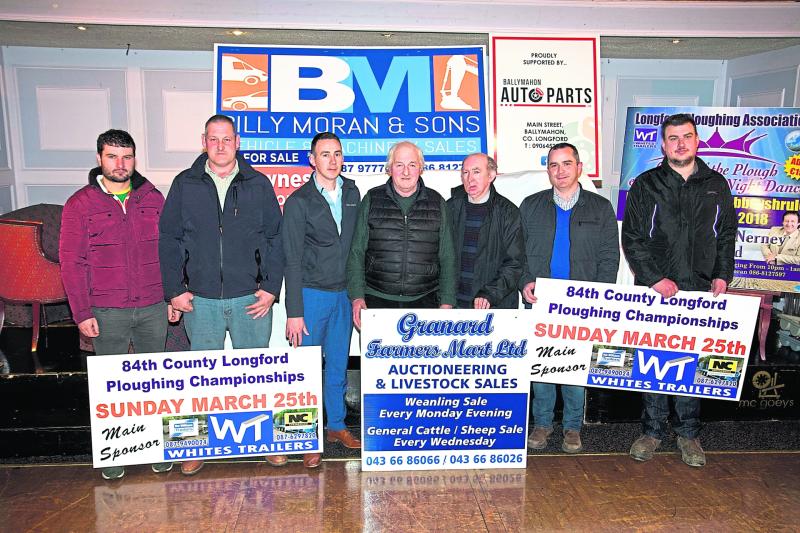 The 84th County Longford Ploughing Championships was launched at the Rustic Inn, Abbeyshrule two weeks ago to much fanfare.

This year the Championships take place on the Carrickedmond lands of John and Maura Harte who are no strangers to the event having hosted it back in 1996.

Speaking on the night, local IFA chairman, Séan Conefrey pointed to the importance of an event such as the ploughing championships and the pivotal role of the farming community in rural Ireland.

He also added; “It’s a pleasure for IFA to be associated with Longford Ploughing Association”.

The local IFA chief went on to say that he had been attending local ploughing matches since he was a “nipper” and it was a most enjoyable day out for all the family.

“It takes a lot of hard work and community effort to get an event like the County Longford Ploughing Championships off the ground and certainly in the week gone by the community spirit around this county was very much to the fore,” he added.

“Farming has really moved up in prominence after the bad weather; farmers were instrumental in clearing roads and assisting people with hospital appointments and accessing emergency services.

“Farming has been shown in a very good light as a result of this and it is great to see this happening.”

“The Ploughing Championships is a great day out for all the family and highlights all that is good about rural Ireland.”
Meanwhile, local area representative in Carrickedmond, Cllr Mick Cahill (FF) also spoke on the night.

He said the fact that the event was being held in his locality made it that bit extra special.

“It’s great to see the Ploughing Championships back in Carrickedmond - it was last held here in 1996 - and it’s also very heartwarming to see the huge community effort that is at play,” Cllr Cahill added.

“The farming community works with everyone in the locality and it is great to see people ploughing on the day.

“It’s something I enjoy myself, and the event provides a wonderful opportunity for people who are not in farming to experience rural life at its best.
Cllr PJ Reilly (FF) represented Granard Mart on the night.

He said that the County Longford Ploughing Championships went from success to success with each passing year.

“It is the largest ploughing match outside of the National Ploughing Championships and is recognised as such,” he added.

“The event is a family day and there is something for everyone.”
PRO, Longford Ploughing Association (LPA) Luke Casey then asked that those providing trade stands at the event endeavour to set themselves up on the day prior to proceedings.

Organisers also pleaded with the public not to drive on the ploughing field prior to the event so the ground remains in top class condition for the championships.

The much anticipated County Longford Ploughing Championships take place on March 25 at 12 noon and is sponsored this year by local company Whites Trailers.
God Speed the Plough!