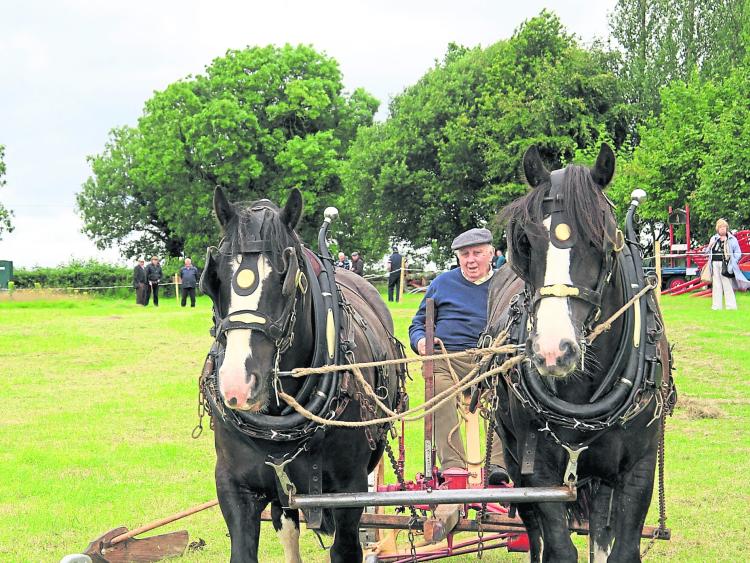 Eamon Egan with Murph and Gerry.

Eamon is a former chairman of County Longford Ploughing Association and current Secretary of the Loy Association of Ireland.

He went to his first ploughing match in in 1957.

As he says himself, he didn’t fair out too good, but he was there to get the experience and improve his skills as much as he could.

Eamon qualified for the All-Ireland Ploughing Championships that year and he has been going every year since.
That was 1959.

In 1960 the County Longford ploughing championships were held in Kenagh and that was a special day for Eamon Egan and his family.
“That year we introduced the Farmerette Class, and now 50 years on it is still as strong as ever,” he added, although he also pointed out that the class wasn’t without its opposition!

It was a time when the ploughing was sponsored by the Co Longford Agricultural Committee, which held great stead in the county at the time.
But it is traditional farming methods that appealed to Eamon the most.
The Kenagh man loves horses and horse ploughing and of course Loy digging.

After the emergence of no less than three All-Ireland Loy digging champions from Longford a few years back - Matt Connell Sr and Bernard Casey (Senior Loy) and Matt Connell Jr (Junior Loy), Eamon began to take a nostalgic look back at the skill and the importance it held for the land before advances in machinery took hold.

Meanwhile, the County Longford Ploughing Championships went from strength to strength and competitors and spectators alike began coming from all over the country to local matches.
Eamon established the Queen of the Plough in the 1960s and was also instrumental in setting up the Farmerette Class.

And, now at 84 years young, Eamon is planning for the next ploughing event which takes place in Carrickedmond on Sunday, March 25 next at 12 noon. God Speed the Plough!

Longford Ploughing is a family affair