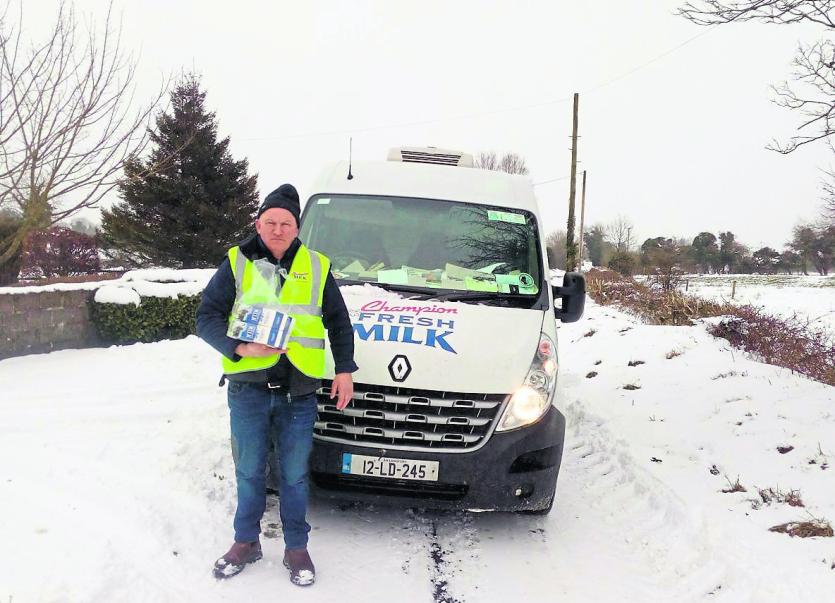 The snow certainly brought out the best in Longford people last week as a number of fantastic videos appeared all over social media.

One such video was of Champion milkman, Enda Murphy, who was working hard to get through the snow so that he could deliver milk to his regular customers.

Dedicated Enda spoke to the Longford Leader last week, stating:
"I have shops along that route that I've been dealing with a long time that were out of milk, and houses with a few old people that would be relying on me to call.”

In fact, it was 3pm on Thursday before he finally admitted defeat and headed home before Storm Emma struck the county.
He was up and at 'em again on Friday, though, with plans to get to his remaining customers that afternoon.

"The main roads were passable, but on the back roads there were unbelievable snow drifts in places. I got stuck twice and I had to get a tractor to pull me out twice," he said, commending the local farmers for the work they were doing on the roads during the bad weather.

"It was just unbelievable. It's the worst weather I've experienced in 18 or 19 years anyway," he added.

Enda's dedication was very well-received online last week as people around the county praised his efforts.

Another man who was well-received online was Ballymahon walking enthusiast, Tom Skelly, who was spotted out for his daily walk in a pair of shorts.
In fact, he was caught on video by Enda Gerety, who kindly gave the Leader permission to publish the clip.

For Ballymahon residents, Tom Skelly walking in shorts is a familiar sight, but the rest of the county - and indeed the rest of the nation - probably questioned his sanity when the video went viral.

Another video that had people all over the county laughing was a hilarious YouTube clip created by Ballymahon brothers Troy and Ivan Millar.

The video described the 'Beast from the East', as a 'scantily clad' beast that was 'after coming over from Siberia' to terrorise the country.
The video is a hilarious take on the country's reaction to the storm and the snow.

These beautiful videos showed a number of picturesque locations around the three towns.

On top of all the fantastic video clips accumulated by the Longford Leader by various Longford folk, there are hundreds of photographs and a number of local stories of how Longford dealt with last week's weather.