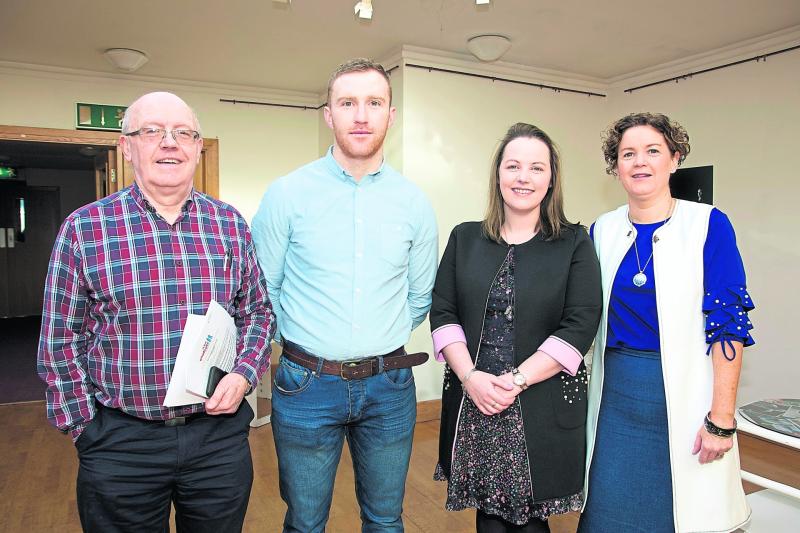 Longford County Council in conjunction with An Garda Siochana and Axa Insurance hosted the Axa Road Safety Show in Longford's Backstage Theatre last Wednesday to an audience of Transition Year students from a number of schools across the county.

Road safety was to the fore on the day and Moyne native, Peter Reynolds spoke to those gathered about living without his brother Joseph who died following a road traffic collision in July 2016.

Both he and his family were left devastated by the death of Joseph who was just 18 years old at the time of the crash.

“I am here to inform you of the real life impact these accidents have on a family, sibling and a friend,” he told students, members of An Garda Síochána and council executives who gathered at Backstage Theatre on the day.

“My brother Joseph was tragically killed in a car accident in which he was a passenger, while on his way to a night out with friends.”
Peter went on to say that he remembered Joseph as a big smiling 6 feet 4 inches tall man who was full of life, ambition and dreams.
He was also one of a family of eight including three sisters, two brothers and his mam and dad.

On the day, Peter told those gathered that the young north Longford man had just completed his first year in college when the accident happened and had passed all his exams in a course he had worked very hard to get while doing his Leaving Cert.

“Joe was an avid rugby player, enjoyed the craic and was generous beyond anyone I have ever known,” Peter continued, before pointing to the fact that at roughly 11:15pm on July 17, 2016, the news that nobody hoped to hear landed at his family’s door.

He then described how members of the family dealt with the confirmation that their brother and son was dead.

“Then nothing, not a sound - he went numb.

“His body could not accept the news that his youngest son was dead.”
Peter said that he remembered his brothers and sisters around him that night, all “crying uncontrollably”, while grown men and neighbours were brought to their knees by the sudden and unexpected death of his little brother.

The event at Backstage Theatre heard that following the accident, Joseph Reynolds was taken by ambulance to the Midland Regional Hospital, Mullingar.

“My mother was not at home at the time, but we met her at the hospital in Mullingar,” said Peter.

“This was the hospital where she gave birth to her youngest son and yet this was the place where he died.

“She did not speak; her face was drained of emotion and she did not respond to anyone’s calls.”

Peter then recalled his last memories of his brother.

“Joseph left the house that night joking about ladies and his friends which he never reached,” he smiled.

“The second last time I saw him, he had this huge cheeky smile, as he always did, and the next time I saw Joseph he was lying in a morgue chapel in Mullingar hospital.

“He was almost unrecognisable; his face was ripped apart from the force of the crushed glass, while his ears were packed with cotton wool and attached to steel pins to stop the flow of blood through them.
“His chest was punctured, his arms were covered in scratches and his hands were still warm.

“Joseph always did have a warm heart.”

The north Longford man went on to say that his brother was subsequently taken from the hospital and cleaned and dressed for his last journey home.

“Joseph was dressed in his debs suit - his first time to wear that suit was the best day of his life, his second time was his funeral,” he added.
“We then buried our son, brother and best friend - something that no family should have to do.

“I also realised that this was the last time that I would ever see my brother.

“Since then, the pain really starts; you cry most days for no reason; you don’t want to leave your house; you have no interest in doing anything.
“Once you lose your brother and best friend the pain is just too much.
“I have, too, spent numerous nights comforting my father and mother at 4 o’clock in the morning.

“I have heard my sister roaring my brother’s name in her sleep and waking up in cold sweats from the shock of it all.
“Can you imagine losing your best friend - your world - in the blink of an eye?”

Peter also explained that the driver of the car that night, was a young lad who was one of Joseph Reynolds’ best friends. The driver of the second car was also a friend of the two boys.

“Life for us will never be the same; we live but our lives are shrouded in loss and emptiness.”

He concluded by offering these words of advice to the youngsters in attendance.

“Think carefully when you are behind the wheel of a car because your decisions could have detrimental and everlasting effects.”