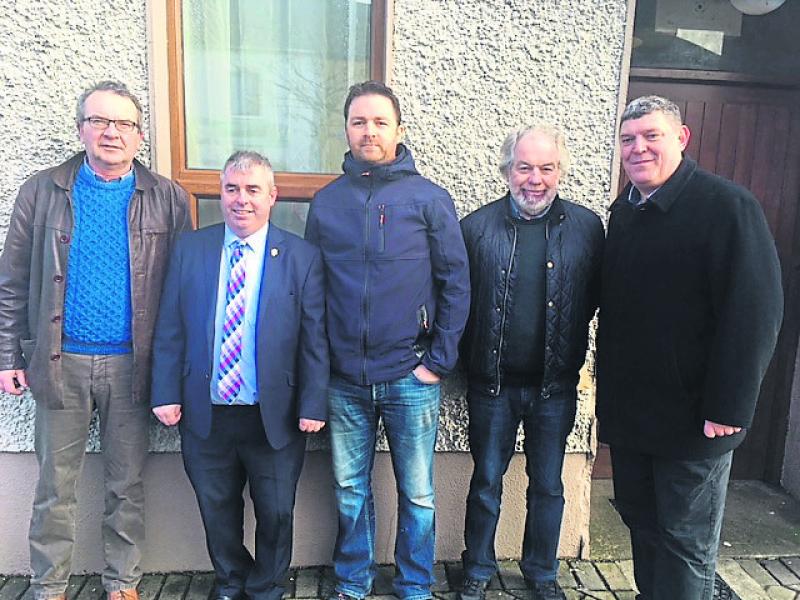 Members of the ‘No to Derryadd Wind Farm’ group that is opposed to the development of a wind farm in south Longford met with Minister Kevin ‘Boxer’ Moran last Saturday in Lanesboro.

Niall Dennigan explained the health implications for people in the area as a result of the proposed development and highlighted the many other reasons why people in south Longford do not want a wind farm on their doorstep.

“A lot of the issues we have are the same as every other person in the country facing a wind farm development in their area,” he said.
“The concerns we have include noise, shadow-flicker and health concerns such as epilepsy.

“There was a study done in Australia - the results only came out last week - and that indicates clearly that people are suffering from heart problems as a direct result of wind turbines; that is a very worrying development as well.”
Mr Dennigan went on to say that residents were also extremely concerned about flooding as a result of the development which includes the installation of 28 turbines.
“There are flooding issues already taking place downstream in Lanesboro and putting in 28 turbines will just add to this problem,” Mr Dennigan continued.

“There is also flooding issues in Athlone as well and all of this is going to have an impact.”
Addressing the group, that was assisted on the day by Cllr Mark Casey (Ind), Minister Moran said that his priority was to protect people living in close proximity to wind farms.

“A meeting is being set up in three weeks time so that we [OPW] can understand better where we stand in relation to these type of developments and how we can become involved,” Minister Moran added.
“It is because of the level of wind farm developments that are being proposed for this region that I want to see the OPW having a more active role.

“I have been around the country and there are people suffering because of these developments.”
New legislation in relation to wind farms is due to be passed by Dáil Eireann within the next two months and the Leader understands that part of that includes the removal of subsidies to organisations investing in wind energy.

“Proper planning processes need to be put in place for developments like these and OPW needs to have a more active role in that,” added Minister Moran.
“One thing that I am adamant about is that wind turbines won’t cause issues in relation to flooding.

“This area here in south Longford has been highlighted for this development, but for what reason I cannot say; once the new legislation is in place, I will be back with ye to work further on this.”

Meanwhile, Mr Dennigan told the Leader that the removal of subsidies was certainly a step in the right direction where wind farms were concerned.
You can guarantee when subsidies are removed, a lot of these developments will be withdrawn from planning altogether,” he added.

“These developments are a money grabbing exercise with no consideration whatsoever for the people who live in their vicinity.”