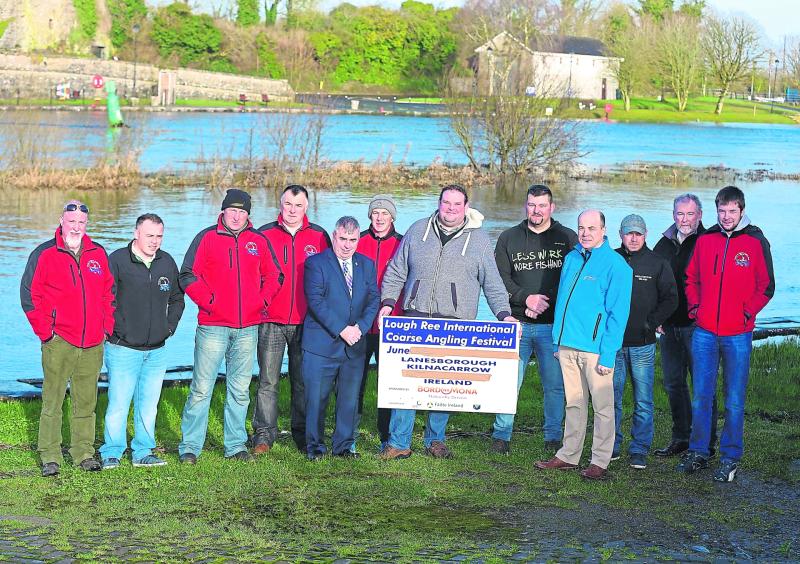 The launch of the Lough Ree Angling Festival took place along the banks of the River Shannon in Lanesboro last Saturday morning.

However, Minister Kevin ‘Boxer’ Moran and Minister Denis Naughten were told that issues have emerged along the hot water stretch in the river that will have a negative impact on the competitions this year.

“Not only is this situation here affecting our competitions, but it is also affecting the tourism in the area,” Philip Gordon, Secretary, Lough Ree Angling Hub said, before pointing out that, in the past, the area had been one of the most prolific fisheries in Ireland, if not Europe.
“The problems that we have here now is the levels of the river and the Asian Clams.

“At the moment the river is flooded; in the summertime the levels are so low, and because of the depths and the Asian Clam, the water gets too hot and therefore cannot sustain the fish.

“So it is not fishable during the summer either.”

Those gathered for the launch went on to hear that the emerging issues would not sustain a three day competition like the one proposed for June.
“It sustains one day only; it’s very, very good for the first day, but after that, because of the levels of oxygen in the water, the fish come in but disappear,” Mr Gordon continued.

“What we need is for the water levels to be deeper and the clams removed.”

“We would have the fishing back here for 12 months of the year,” added Mr Gordon.

“Now, we no longer have the same tourism from the UK and we do not have the same level of fishery here - it has never been managed or maintained, and over the years the levels have become lower, the clams have come in, so the river needs maintenance and a management programme.”

Responding to Mr Gordon, Minister Naughten said the most frustrating aspect of the situation presently, was the biosecurity issue that had arisen.

“For me, the big problem has been to get the biosecurity issue moving because invasive species don’t come under my department, they come under Josepha Madigan, Minister for Culture, Heritage & the Gaeltacht,” the Minister continued, before pointing out that efforts were now being made so Inland Fisheries Ireland (IFI) and the Department would have a direct role in dealing with invasive species in the nation’s waterways.

“We will then need to look and see how we can manage this particular problem here; there is a Statutory Instrument to be signed by Josepha Madigan and this will allow us to take a far more proactive role with managing the biosecurity issue that we have here in relation to the invasive species.”

Meanwhile, Minister Moran said the proposal to get all the right bodies together would afford public representatives the opportunity to gage where to drive the project.

“OPW always work closely with IFI and will continue to do that; my department has made it quite clear that machines or anything else that is required to carry out the necessary works here will be supplied,” he added.

“I would like to see this matter being dealt with once and for all.”

Rise in fishing on Lanesboro's banks