A Christmas gift that brings Kenagh to people around the world 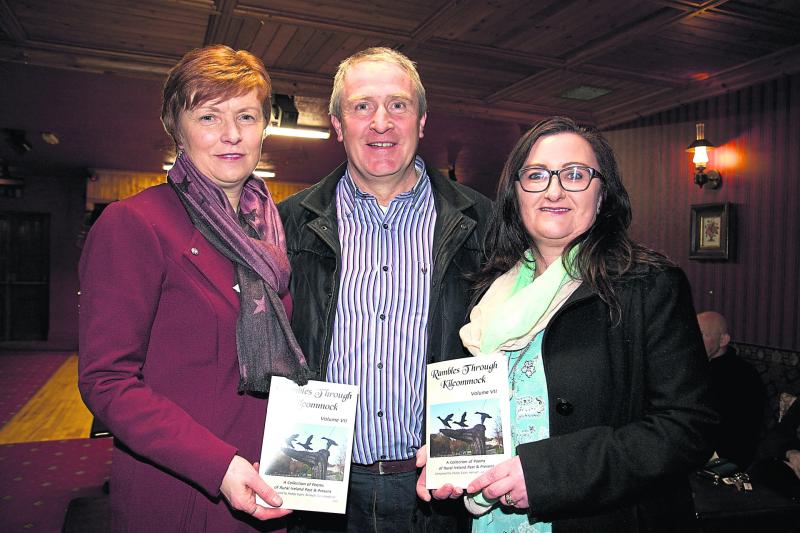 Mary and Danny Keogh with Breege Egan-Lawlor at the launch of Paddy Egan's latest book. Photos by Michelle Ghee

Books have always been great gifts and stocking fillers over the Christmas season, but Paddy Egan from Kenagh aims to do more than just give people a good read with his new book of poetry, Rambles Through Kilcommock.

This is volume seven in Mr Egan's collection of poems of rural Ireland, past and present, and is packed with poetry that has specific focus on Kenagh and the surrounding area.

“It's a nice present because it brings Kenagh to people around the world,” Mr Egan told the Longford Leader last week.
“I had people from Canada, America and England looking for copies, so I'm after sending a load of books away to them.

“It brings Kenagh to those people who have lived in Kenagh, but are living far away now.
“For them, it's a reminder of home.”

The book was launched in Gav's bar, Kenagh, earlier this month, with a good crowd turning up to support the esteemed local historian.
Many of the book's poems, like in the previous six volumes, focus on tales of local folklore and fantasy.
“I have been writing these (poems) for 20 years and have over 200 poems published,” Mr Egan told the Longford Leader ahead of his book launch on December 1.

In fact, four of his most contemporary writings feature in the Longford Leader's inaugural Almanac publication, which is available for purchase in newsagents across the county.

But it's the latest offering of literature that will really give you a taste of Mr Egan's poetry, and the local area around his beloved Kenagh.
“It's a fairly colourful book. The three birds on the front are a permanent fixture in Kenagh now,” he said, referring to the cover image of the bog oak sculpture in Kenagh.

The sculpture was created by Brendan Collum Bog Oak Sculptures and was erected in October by the Kenagh Development Group, enhancing the approach road from Ballymahon.

It's now immortalised on the front of 'Rambles Through Kilcommock'.
The book was launched on December 1 by Fergus O'Farrell, formerly of Abbeyderg, Kenagh, and was very well attended by locals and non-locals alike.

“It went well. There was a good crowd. People came from Dublin, Westmeath, Mullingar and other places.”

The book is on sale now for €10 in five places around the county, including: Baxter's Pharmacy, Longford; the Post Office in Kenagh; Terlickin Filling Station; Hanlon's in Ballymahon; and Gav's Bar, Kenagh.

Tourism hub to be created in Kenagh