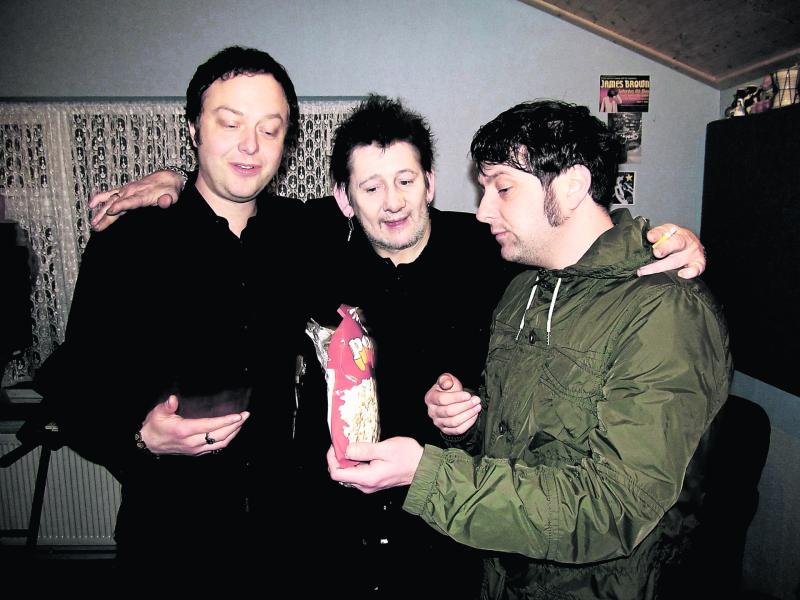 Shane McGowan keeps his eyes firmly on a bag of popcorn held by Mick Cronin while his brother Johnny looks on.

A leading figure behind one of Co Longford’s most decorated music groups has landed a plum role in being selected to perform at Shane McGowan’s upcoming 60th birthday at the National Concert Hall.

Mick Cronin, a drummer with locally based group Cronin, received a call from the legendary singer to play at the eagerly awaited gig next month.

The concert, which is part of the NCH Perspectives Series celebrating “the power and poetry of Shane’s work” is set to feature leading figures such as Nick Cave Bobby Gillespie of Primal Scream, Blondie’s Glen Burke, Glen Hansard, Finbar Furey and even an appearance from acclaimed Hollywood actor Johnny Depp.

Such has been the star studded appeal behind the event, tickets for the occasion sold out within half an hour.

Mick, alongside his brother Johnny, Fiachra Milner and Brian Murphy, are no strangers to collaborating with the Pogues frontman.

In September, McGowan joined the quartet on stage for a special performance at Electric Picnic 2017.

Giving his reaction to the Leader this week, Mick said confirmation over his own involvement in the celebration had still to sink in.
“It’s just unbelievable,” he beamed.

“I only got the call from the National Concert Hall on Friday, so it’s just amazing. It’s going to be the gig of a lifetime.”

A self proclaimed fan of The Pogues and Primal Scream, Mick said he was especially looking forward to rubbing shoulders with one performer in particular.

“I’ve been a huge fan of Clem Burker from Blondie and sharing a drum kit with him is going to be incredible,” he enthused.
The man who Mick will be performing for actually turns 60 on Christmas Day with the NCH rolling out the red carpet for the renowned rocker on January 15 2018.

Yet for all his amazement at securing his own place in next month’s celebrity filled line up, Mick said there was no coincidence behind the move. “Shane told me to do it,” he added.

“He told me that I had it, but it was only on Friday that the call came through from the National Concert Hall.

“We (Cronin) are good friends and would see Shane twice a month anyway for coffee and that.

“This (January 15 concert) though, is going to be massive.”