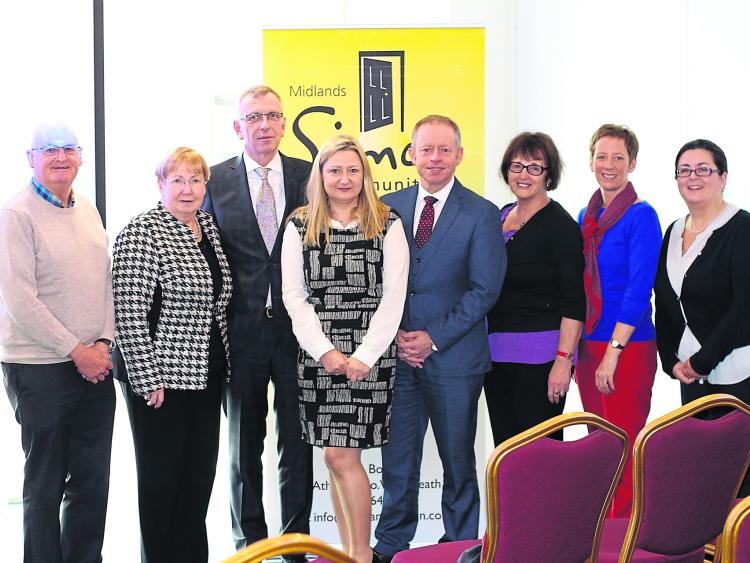 Minister Ciaran Cannon with the Board of Midlands Simon Community

That saw Midlands​ ​Simon​ ​Community host a European​ ​delegation​ ​of​ ​Homeless​ ​Services over the course of two days last week.

Groups from eight European homeless organisations toured Midlands Simon Homeless facilities in Tullamore and Athlone on Thursday to learn at first hand why the midlands Simon model has been so successful in combating what is one of the most topical issues in the public domain at present.

Part of their time in Ireland was also spent listening to experts to give them an insight into how the midlands and Ireland is dealing with the homeless crisis.

Last Friday, the group watched on as presentations were delivered by Minister of State Ciaran Cannon and Sr​ ​Jean​ ​Quinn​ ​DW,​ ​Director of Unanima International.

There were informative addresses too from the likes of Antoinette​ ​Kinsella​, Midlands Regional Drugs Task Force and Kieran​ ​Butler​, Coordinator of Homeless Services in the Midlands.

During his speech, Mr Cannon praised the voluntary work done by groups like the Midlands Simon Community in Ireland.

He also pointed out the value of the European Seminar to how services are delivered to those that need them.

If you are denied integration in a society there will be inevitable mental health needs. delegates were told.

The European delegation has representatives from Greece and Italy who are also dealing with the refugee crisis.

Jean Quinn, DW Executive Director of Unanima International and Founder of Sophia Housing spoke about how we, as communities, all need to do more to prepare to welcome migrants.

She said that there needs to be space at the top table with leaders for people from all backgrounds if integration is to be a success.