SuperValu Tidy Towns 2017: Lisryan has a tranquil feel to it and the community is very proud of its own place 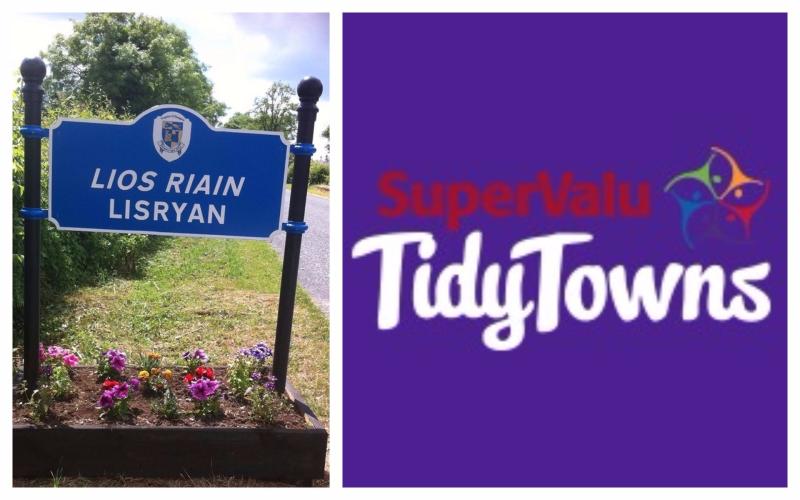 Here's what the SuperValu Tidy Towns 2017 adjudicators had to say about Lisryan and above are the marks Lisryan received.

Lisryan is very welcome to the 2017 Supervalu Tidy Towns Competition.

Thank you for your concise application form, sketch map and proposed plan for old sportsfield which you wished well with and hopefully it realise its full potential and be a major asset to Lisryan when completed.

The committee of 10 is more than adequate for a village to size of Lisryan and it is noted that this only your fourth year in the competition and progress has been incremental year on year.

You seem to have good support from the Community both business and other organisations and it’s important to make the most of this support in your quest to make further progress in the competition.

A simple 2/3 year plan under the 8 specific headings of the competition would give greater focus to your efforts in the years ahead.

So I would suggest that you prepare one in advance of next year’s competition part of this will involve the sports field project.

Methods of communication are good as they mix the old with the new and it’s good to report that you intend to get the local school involved in the new sports field project,

This was the adjudicator’s first visit to the village of Lisryan which is nestled in between Abbeylara and Edgesworthstown.

The village is defined by its Crossroads and the main commercial establishment The Cross Roads Inn is the main focal point here.

The premises was well presented on the day being painted in a bright ochre colour that stood out against the backdrop of the bright skyline.

You are very fortunate that the village is small and that its charm has been spoilt by housing developments that were imposed on other places during the so called boom years in Ireland.

Road surfaces were good except for one patch on the road out to Castlepollard.

You are pretty free from over head wires which enhance the look of the village somewhat.

The new speed sign on the Castlepollard Road was needed as the adjudicator noted when walking around that cars tend converge on the cross roads at speed.

The wooden sign that you refer to is an excellent addition.

There are a number of private residences of high at various extremities of the village and these will be mentioned in other sections as well.

The core area of your village is very attractive and other comments will be made under the relevant sections further on in this report.

For your efforts to improve the core area of the village in the last year you are awarded an additional mark.

This is a category that the village has more potential to do well in the years to come.

What is in place is very attractive and the basic work that you have done in repainting flower boxes, enhancing the timber framed well on the Abbeylara Road and looking after the grasss verges and hedges has contributed greatly to the landscaping.

The adjudicator suggests that as part of the new sports field development that you develop a landscaping plan for the village in tandem with the other work that will take place.

The standard in this category was added to by the number of exceptionally well presented and attractive private gardens that were observed during the walkabout.

These will also be commented upon in other sections of the report but have been one of the main contributors the landscaping effort.

The area around Lisryan has many wildlife habitats and the objective in this category is to create an awareness of these and promote the concept of wildlife conservation amongst the local community.

When you are planning the wildlife element of the Sports Field Development you should make contact with a local wildlife enthusiast as well as either the Heritage Officer or Environmental Office fromLongford County Council who will give you direction on what are the best steps to take.

It could be that as well as the bird boxes and the bug hotel that you consider doing an audit of the various bird and animal species that are in your vicinity and devising a series of information panels that can be placed at the perimeters of the new development.

The idea of getting local school children involved can have a twofold benefit it is an education process for them and also children bring enthusiasm and no little creativity to these types of projects.

The schools involved might even devise their own bio diversity patch within their grounds.

These are just ideas that may trigger more in the minds of committee members.

This category’s main objective is to reduce the production of possible waste i.e. certain packing at source.

It took committees a while to understand the idea and to devise projects that fitted the concept and that adhered to the reuse recycle concept.

The Tidy Towns Unit produced a very informative booklet on sustainable waste and resource management as part of the revising of the Handbook.

If you have not got a copy it can be obtained by visiting the Tidy Towns Website.

Lisryan has the potential to achieve additional marks in this category and the committee should do its utmost to supplement what you have in place.

On the day of adjudication the adjudicator witnessed a number of people using the glass recycling receptacle at the Sportsfield.

Also visit the following website for advice and for project ideas www.localprevention.ie www.greenhomes.ie and www.sustainableprocessing.ie

The most up-to-date advice can be got from the County Environmental Officer and I would urge you to consult with him at an appropriate time that might coincide with courses run by the County Council.

The village was virtually free of litter on the day in question and while the area to be covered is quite small there are a few litter traps on the outskirts.

The regular clean up days help to make sure that there is no build up of litter in areas of the village that are not too obvious to the public.

Well done to the local residents that take time out to pick up loose pieces of litter that may have been dispatched by passersby – it happens still that people throw litter out car windows.

The recycling centre across for the Crossroads Inn was well maintained and tidy.

The general feel about Lisryan is that it is a tidy village and that the local population have a pride of place.

Overall the standard was good and deserving of an increase in marks.

The village is fortunate that it wasn’t subjected to the blight that other small villages suffered during what was euphemistically called the “good times” large developments that were totally unsuitable to the rural surroundings.

There is a housing cluster on the Granard Road Lios Na Gaoithe what a lovely sounding Anam as Gaeilge.

This estate was kept immaculately with a nice name stone at the entrance and well maintained post and rail fencing which was newly painted.

Great credit is due to the residents for this type of collective cooperation in keeping Lios Na Gaoithe up to such a high standard.

The adjudicator was most impressed with the many private homesteads that were so well maintained with attractive front gardens and clean side and back areas.

The approach roads in to the village were very well maintained and this was due to the excellent work being done by the sole Solas worker whom you have acknowledged in your application.

The road in from Abbeylara has nice a feature of a wishing well with stone surround but there is no indication in the submission of who is responsible for its upkeep.

Japanese knotweed has shown its ugly head in parts of Longford as this adjudicator noted during his travels around the County.

Longford County Council has taken prompt action to notify people of procedures to deal with this most destructive of invasive plants.

The entrance from Castlepollard was also well maintained as was the Granard entrance.

The new name sign was admired in the centre of village and credit is due to those with responsibility for coming up with the idea.

All the name signs were washed and clean as stated in your submission.

Concluding Remarks:
This was the adjudicator’s first visit to Lisryan which is a small cross roads village where three roads converge.

It has a tranquil feel to it and the community is very proud of its own place judging by the overall presentation of the area on the day of adjudication.

You are wished well for the future.