Tidy Towns adjudicator impressed with the community spirit in Derrahaun 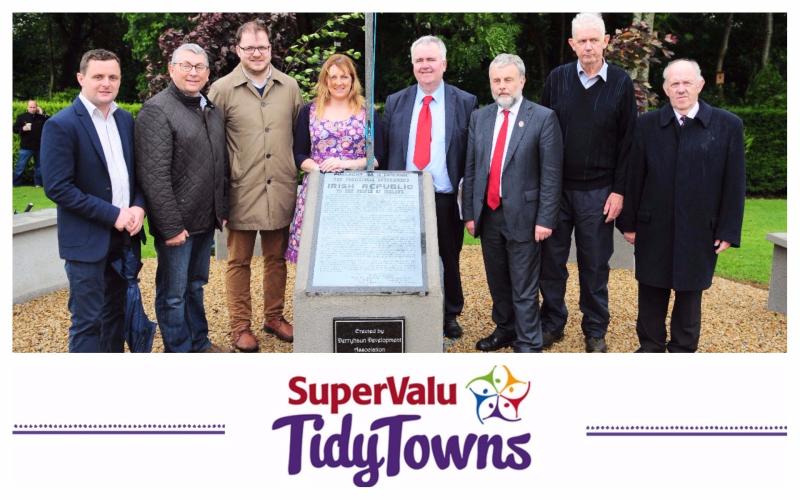 Here's what the SuperValu Tidy Towns 2017 adjudicators had to say about Derrahaun and above are the marks Derrahaun received.

Community Involvement & Planning / Rannpháirtíocht an Phobail & Pleanáil:
Derrahaun is very welcome to the 2017 SuperValu Tidy Towns Competition. Thank you for the very well composed and concise application form, excellent sketch map of your picturesque village and documentation on the schools green programme and biodiversity project.
You have also included a note of special thanks for your generous contributors to your work which is nice gesture. Yes indeed there are a number of spellings of the village as witnessed by the adjudicator on this his first visit to the village. The population category that you are in surprised me at first glance but on traversing the village and its outskirts one can see that it takes in a large enough area. Of course like many other villages and small towns in the midlands the village has long association with Bord na Móna which is reflected in the houses that were built in the 50s.
Your committee size is more than adequate for the size of your village. Lasting relationships have been built up with a number of agencies and of course Longford County Council. You have an excellent approach to dealing with the wider community and the value of one to one contact can never under estimated even in this day of instant social media communication.
The school involvement is one of the best experienced by this adjudicator during a good number of years in this job. Thank you for your endorsement of the competition and what it means to the greater Derrahaun Community. You have attained a good standard in this category over the last number of years and this year is no different.

Some of the input in this category has been interspersed with the landscaping and open spaces category but it can be dealt with under the two headings.
The village does not have a village street as such and is a little unusual that it doesn’t have a core area consisting of the usual shops or a village pub.
Cloontagh NS is a little outside of the main village and is presented to a very high standard indeed. The school is a very progressive one in that it has attained a very high green flag standard that one would not see in larger national schools. Well done to both the teachers and the pupils for achieving this well deserved accolade.
The school also has a separate entry in the SuperValu Youth Award. The adjudicator was very impressed with the Commemorative Stone Based Memorial on the wide green area on the Longford Road and also the reason why James Connolly was chosen. This was a very big undertaking for any community irrespective of size so you are to be commended for your endeavour and creativity.
This was one of the best Tidy Towns initiated 1916 projects seen by this adjudicator in the last year.
As was stated in last year’s report the village was not encumbered by unsuitable over development that happened in other villages nationwide.

Landscaping and Open Spaces / Tírdhreachú agus Spásanna Oscailte:
Landscaping and the management of your green spaces are in indeed one your strengths. The commemorative memorial to James Connolly takes centre stage and this is complemented by an excellently maintained green space. The trees, copper beech and beech if one recalls correctly, and shrubs planted at the perimeter of the memorial will mature with time.
One concern maybe that  over the years they may overshadow the stone structure but one assumes that you have been advised correctly on the matter. There is no point in repeating back to you what you have done and inputted into your submission it is suffice to say that the standard was very much on par with what reported on last year.
The adjudicator would suggest that you try to keep the crossover from built environment and landscaping to a minimum for next year’s application as it can be a bit confusing especially when deciding on marks. The adjudicator also took his own photograph of the James Connolly Memorial.

Wildlife, Habitats and Natural Amenities / Fiadhúlra, Gnáthóga agus Taitneamhachtaí Nádúrtha:
You have some very interesting mini initiatives that you have undertaken in this category and as you rightly say that the village is surrounded by bog lands a haven for natural wildlife habitats. The objective of this category is to create an awareness of the wildlife that exists in one’s area and to take measures to promote the preservation and conservation of the different forms of fauna and flora.
One notes, in conjunction with the National School, that you are in the process of carrying out a survey of the fauna and flora that exist in Derrahaun area.
We will look forward to seeing the results and the interpretations of same in next year’s application although it is noted that this project seemed to have been initiated last year judging by comments in last years report.
Cloontagh National Schools Green Schools Project and its biodiversity programme are very impressive and are major contributors to what you are trying to achieve in this category.
The adjudicator admired your wildlife area with bird boxes and community composter to the fore. The birches on the Newtowncashel Road were also noted during the adjudication walkabout. The adjudicator also gained some additional knowledge that he can use for further reference in relation the danger of gorse and bog fires and their destructive impact on the environment. Overall the standard was very good and merits an increase in marks.

Sustainable Waste and Resource Management / Bainistiú Acmhainní agus Dramhaíola Inbhuanaithe:
The main objective of this category is to reduce the production of unnecessary waste at source and the category criteria have changed to reflect this. Last year’s report had an n interesting take in that it alluded to the fact that as a small village you are not a generator of large amounts of waste.
That said there is still ample opportunity for you to gain marks under this category by providing evidence of how you promote the use of resources such as water and transport in your community. Encouraging local residents to consider taking the necessary steps to eliminate as much waste from their daily routine is very much recommended.
The school information submitted was read with interest and is very much in line with the main objective in this category. The following are websites that will allow you to investigate the possibilities of additional project ideas www.localprevention.ie www.greenhomes.ie and www.sustainableprocessing.ie In addition the Tidy Towns Unit booklet produced few years back is also another good source of information on the subject matter.
As a progressive community you may also consider looking up what the circular economy has to offer.

Tidiness and Litter Control / Slachtmhaireacht agus Rialú Bruscair:
The fact that your village is quite small is a help in terms of trying to identify areas that could be considered litter black spots. These have been very much identified and named in your submission and the measures that you  have, taken such as regular late evening litter picks, are having the desired effect as on the day there was virtually no litter to be seen. Summer and autumn weekends can be very “productive” times for litter as there are a myriad of leisure activities such as festivals taking place. General tidiness was very good in the village of Derrahaun.
Verges were kept well, weeds are cleared at regular intervals and even though the surrounding area is very rural there was very little farm related activity residue seen.

Residential Streets & Housing Areas / Sráideanna Cónaithe & Ceantair Tithíochta:
Derrahaun is unusual in that similar to Coill Dubh in Kildare and Rochfordbridge in the neighbouring county of Westmeath it was very much a Bord na Móna Village. Thankfully, unlike the last mentioned, it was not subjected to overdevelopment and the possibility that the character of the village would be totally destroyed. The residents have a great sense of pride of place and this is reflected in the manner in which they have presented their homesteads.
Very little more to offer in terms of advice except to keep doing what you are doing as it is having the desired effect. The committee’s recognition of the efforts of residents has been noted.

Approach Roads, Streets & Lanes / Bóithre Isteach, Sráideanna & Lánaí:
Again thanks for the excellent sketch map it was much appreciated in identifying the roads in and out of Derryaaun. The village is situated on a busy cross roads and the stretch on the Lanesboro Ballymahon road can be an invitation for some motorists to put on the gas. That main road has beautiful entrances from both sides with exceptional name stones, tidy green areas, raised flower beds on those green areas and tree lined vista on the other side.
The Longford entrance was also impressive with nice timber name sign, young saplings that will mature in time and well kept verges. The Newtowncashel entrance was also of good standard. Signs were in good condition, road surfaces good, but maybe there is need for a little more traffic calming measures on the Ballymahon Lanesboro Road.

It was a pleasure to visit this very attractive village for the very first time and learn about its association with Bord na Móna. Very impressed with the community spirit in Derryaaun and you are wished well for the future.