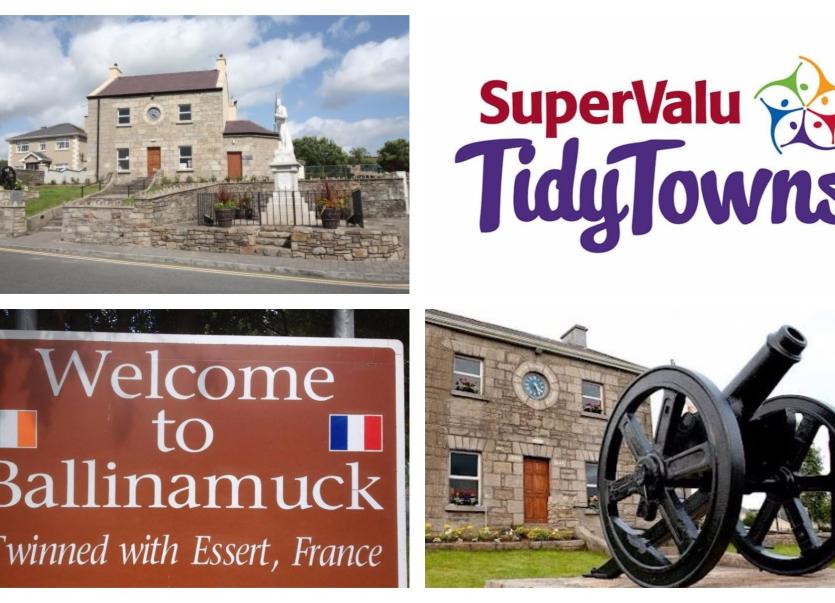 Here's what the SuperValu Tidy Towns 2017 adjudicators had to say about Ballinamuck and above are the marks Ballinamuck received.

Community Involvement & Planning / Rannpháirtíocht an Phobail & Pleanáil:
Ballinamuck is welcome to the 2017 Supervalu Tidy Towns Competition.
Thanks for the well documented application form complete with short term action plan and map of the village and surrounds which was very helpful to the adjudicator who was a first time visitor to the village. The action plan for 2017 and onwards is very practical and achievable in the timescales laid out.
The Committee of 10 is supplemented a good number additional volunteers who help out when required. To get this type of supports augurs well for the future and is a testament to the committee’s reputation in the community. You are very proactive in your approach to improving your standing incrementally year on year and no doubt that you envisage further improvement in the years ahead.
There is a good evidence of agency and local authority support in your application and from these sources you have derived good practical benefits. Methods of communication are varied mixing social media with the traditional newsletter. Also it is important not to forget the best source of communication known to mankind –word of mouth.
It would be good to have a Junior Tidy Towns Committee in place as it will be a natural follow on for pupils of St Patrick’s National School. You have a very good philosophy on how best to serve the community as one of the main drivers of activity in the parish. The fact the Tidy Towns Competition gives you a national platform helps the community as a whole.
Thanks very kindly for the endorsement you have given to the competition and what it has meant to Ballinamuck. You are wished well with your events such as the Olde Fair Day all of which helps to raise the profile of the village.

Built Environment and Streetscape / An Timpeallacht Thógtha agus Sráid-dreacha:
The village is in some respects defined by its historical association with General Humbert and 1798 and this is very much reflected in the Built Environment. The excellent interpretative centre, which incidentally was not open on the Sunday in question, is a very impressive and a focal point building. Similarly with the Remembrance Garden which also has a central position in the village proper.
Dillon’s Pub and Restaurant, the main shop with no name? and Eclipse beauty and hair salon are the main enterprises in the village proper and these were presented to a high standard. The first mentioned has some fine colourful hanging baskets. The Post Office premises have a number of historical artefacts and documents displayed in the main window that  depict different happenings in the life of the village. The premises is for sale and it would be hoped that it re start its life as a going concern.
St Patrick’s RC Church is a very impressive rural ecclesiastical building which was built in the late 50s and the green areas in the adjoining graveyard were neatly trimmed. St Patrick’s National School, which encompasses the old Ceard Scoil,i s a fine school with ample play area and easy parking and lovely window flower boxes. It looked as if it had been recently painted. McKeon’s 98 Pub at the junction of back roads to Drumlish and Mohill, despite it being closed for some time, was quite acceptable and it is hope that maybe by next year it might be up and running as a bar once again.

Landscaping and Open Spaces / Tírdhreachú agus Spásanna Oscailte:
Good landscaping all round with nice planting arrangements at the entrances to the village from Drumlish and the exits near McKeons 98 Pub. The planting arrangements in the centre of the village were top class particularly those at the fountain and at the  interpretative centre.The Garden of Remembrance had a very pleasant and appealing look about it with colourful annuals supplemented by more long term shrubs.
The arrangements at the village pump with the excellent stone base and surrounding wall were admired by this adjudicator. Much of the planting arrangements are taken up with colourful annuals and it takes time to maintain these at a constant high standard.
Well done to the committee members that undertake this maintenance job on an ongoing basis. There are a number of private residences that have superb gardens on show and well done to the owners who have  taken the time to present these to the highest standard on a continuous basis.
Overall there is a nice balance to the planting arrangements viewed on the day which was a reasonable summer’s day in Ireland.

Wildlife, Habitats and Natural Amenities / Fiadhúlra, Gnáthóga agus Taitneamhachtaí Nádúrtha:
The marks that you have achieved in this category since your first time entry some years back are quite modest to say the least. This is a category that the village could do very well in time and the adjudicator feels that you are going the right way about with incremental improvement over the last few years. You could fast track this a little by engaging with the local county wildlife ranger if such a person exists or failing that  the County Heritage Officer.
You need guidance on the best way to maximise your potential in this category which is all about creating an  awareness of the wildlife species that exist in the immediate vicinity. The upgrading of the biodiversity garden and provision of bird boxes are a good start but  you much more to offer. It is important that you get the school children involved so liaising with the principal of the National School is the first and see what can be achieved.

Sustainable Waste and Resource Management / Bainistiú Acmhainní agus Dramhaíola Inbhuanaithe:
This is the category that was explained at length in last year’s report so there is no point in repeating the obvious. The objective of the category is to reduce the production of unnecessary waste at source and the need for this is going be greater than ever give the position re the lack of landfill options in the country. The rethink, reduce, reuse and re cycle motto will have to be brought to another level.
The following are websites that give mini project ideas that will contribute to the main objective. www.localprevention.ie www.greenhomes.ie and www.sustainableprocessing.ie
Consult with the local county environmental officer for guidance and also refer to the Tidy Towns Handbook for the excellent booklet form document that the Tidy Towns Unit produced a few years back.

Tidiness and Litter Control / Slachtmhaireacht agus Rialú Bruscair:
Well done on your continuation of your joint team effort with your near neighbours Drumlish in the National Spring Clean in April. It has produced good results and also alerted the committee to any potential black spots that can be monitored on regular basis as part of the regular weekly pickups.
In relation to the question of posters planted on the side of the road this can be a sensitive issue as often these advertise charity events or summer festivals. On the day the village was litter free except for a few wrappers at school boundary wall.
General tidiness was good with exception of two traffic signs on the outskirts of the village. The recycling banks near the well maintained playground in the community hall car park were very clean and tidy  and free of any rubbish at base. As a final comment well done to the senior residents, I’m loathe to say retired, for their contribution to their community. It has been well recognised by the Committee.

Residential Streets & Housing Areas / Sráideanna Cónaithe & Ceantair Tithíochta:
It was good to note that both housing estates have their own residents committees and the benefits of this type of arrangement are to be seen in both places. Both were very well maintained and the green areas cut and tidy. St Patrick’s Court has an excellent planting arrangement at the entrance as well as parking for residents only sign.
The name sign as Gaeilge Clos Naomh Padraig was admired for its simple effectiveness. Cuirt Shanmhullagh has set a high standard in terms of presentation and has been rewarded in the county best estates competition in the last few years.
The children’s playground is a fine amenity tucked in a central area at the back of the community hall. The equipment is modern and sturdy and provides ample opportunity for children to enjoy leisure time and get some exercise activity in the process

Approach Roads, Streets & Lanes / Bóithre Isteach, Sráideanna & Lánaí:
The adjudicator wasn’t too sure where the boundaries were from the map provided and it’s important to make these rather obvious in next year’s application. A simple red line at each entrance stating “boundary” would suffice.
I note that Gunner McKee, alluded to in last year’s report, has been sent for some treatment it is hoped that it will be back in situ by next year’s competition entry! Well done on the detail of the work that you have undertaken since last year and also you have made it clear to the adjudicator that certain works will not be finished until later in the year. This has all been taken into account.
All entrances were more than acceptable in presentation and the work done by you the committee has been noted. For next year I would urge that you define on the map where Gaigue Cross is  for a first time visitor like this  adjudicator it takes a little figuring out whether it is the main cross in from the School or from the 98 pub.

Concluding Remarks:
It was a pleasure to visit, for the very first time, the village of Ballinamuck and learn from the excellent Information Panels near Community Hall its historic association with the 98 rebellion as the scene of one of the major battles of the period. You are wished well for the future.