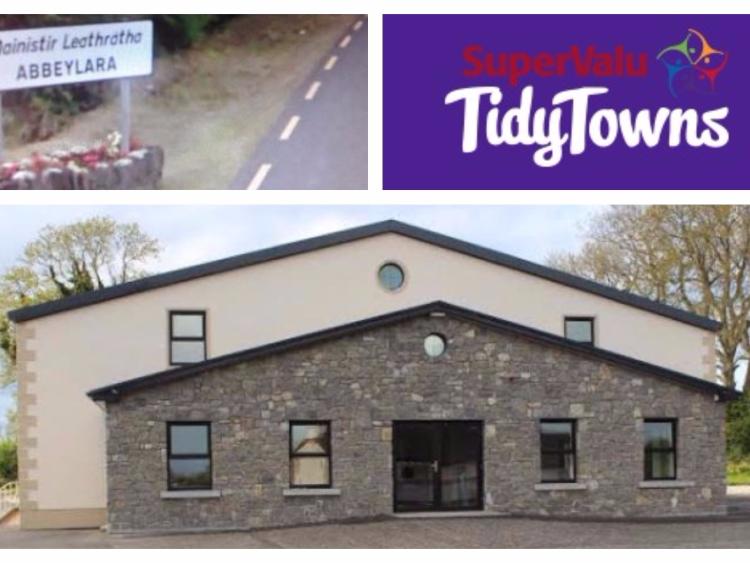 Here's what the SuperValu Tidy Towns 2017 adjudicators had to say about Abbeylara and above are the marks Abbeylara received.

Community Involvement & Planning / Rannpháirtíocht an Phobail & Pleanáil:
Abbeylara is welcome to the 2017 Supervalu Tidy Towns Competition.
Thank you for the completed application form and the excellent accompanying map which was most helpful in identifying places within the village as this was the adjudicators first time visiting Abbeylara.
You state that you have a committee of 6 but there is no indication if you have voluntary support from other sections of the community. It is important that you have local community backing through other organisations as it will make your task of getting work done under the various categories of the competition easier.
Also for next year’s competition you might expand a little on how you engage with the local school. I would suggest that you also consider putting together a simple 3 year plan of work and that you consult with the Longford County Council to see if you can get some form of support through the PPN structure. Consult the Tidy Towns Website to view the Handbook on advice on how to go about putting together such a plan.
Abbeylara is 59 years involved in the competition and as next year is the 60th anniversary of the competition you should make that extra push as you are probably one of the first villages that entered the competition all those years ago.

Built Environment and Streetscape / An Timpeallacht Thógtha agus Sráid-dreacha:
St Bernard’s RC Church in the village was well presented on the day and the grounds were clean and tidy with ample parking for churchgoers. The parish centre adjacent to it is a fine resource for the local community and it looked as if it had been freshly painted.
St Bernard’s National School, St Bernard must be the adopted parish saint, was also in very good condition with old stone wall supplemented by fencing for safety reasons.
There is a rather large development of housing units across from the school that seem to be unoccupied for some time and one wonders what the story is in relation to these. It seems as if Abbeylara like many other idyllic rural villages has been hit by the blight that was the Celtic Tiger.
The general infrastructure of the village was good except for some parts of the footpath that were broken most notably further out the road to Coole. The old ball alley is a throwback to another era but of course the tradition of handball is still strong in Abbeylara and players are now accommodated in the fine new facility adjacent to the old alley.
The adjudicator does not agree with last year’s comment that the old ball alley is an eyesore it’s a legacy of a tradition that has prevailed over time in your village.
Crawford’s Pub and the Shop further up were in good condition and McCormack’s was freshly painted in a nice contrasting colours with the name highlighted in white against a black backdrop.
The information boards were top class and were clean and visible and the area around the river was well maintained.The picnic area further out the Coole Castlepollard Road was well presented also.
Overall the standard was good and warrants an increase in marks.

Landscaping and Open Spaces / Tírdhreachú agus Spásanna Oscailte:
Some nice features in this category were viewed during the walkabout and yes the adjudicator did notice that flower pots were painted in a “happier” colour. Just be aware that the shrubs in the pots near the ball alley may become pot bound as it looks as if they need to be re planted in larger planters.Maybe you should seek more professional advice on the matter and that is available to you locally from your garden centre owner.
The adjudicator would like to see a little more colour by way of small planters of annuals at the picnic area during the summer season as it’s during this time that the area is most used one would imagine. This would complement the existing arrangement that is there at present.
The green area around the river and the seating could be further enhanced by additional planting as well. The village has potential to achieve more in this category and this is where the 3 year plan would be helpful as it would identify the planting requirements over a specific timescale.

Wildlife, Habitats and Natural Amenities / Fiadhúlra, Gnáthóga agus Taitneamhachtaí Nádúrtha:
The objective in this category is to create awareness of the wild life habitats that exist in your area and to promote these habitats in the best way possible bearing in mind the need to consider the preservation of various species of wild life.
What you have listed in your application does very much fit the objective but there is much more potential in your area for wild life promotion or indeed to get involved with the local school on a specific project. You have excellent information boards on the river bank which identifies the wildlife that exist on Derragh Lake and on the Inny River. Is the Abbeylara River a tributary of the Inny?
Maybe for next year’s competition you might do a history of the river in conjunction with the National School pupils that would chronicle its association with the village down through the decades.This is the type of mini project that could well earn you additional marks in the competition.

Sustainable Waste and Resource Management / Bainistiú Acmhainní agus Dramhaíola Inbhuanaithe:
You should highlight in greater detail the national school’s involvement in waste management projects as part of its involvement in the green flag programme.
The more detail you have on this will indicate that you have a strong involvement with the school which is encouraged under the adjudication guidelines of the Tidy Towns Competition. This year adjudicator sought out for himself at firsthand what the school was involved in waste management as part of the green flag programme but it needed to be seen on your application.
This is a category that caused difficulty for many centres when it was redefined a few years back but most committees have got to grips with what is expected in terms of ideas and projects. The main objective is to promote the idea of the need to reduce the production of unnecessary waste at source.
To help you with project ideas that reflect this need it would be worthwhile getting in contact with the County Environmental Officer and also consult the following websites www.localprevention.ie www.greehomes.ie and www.sustainableprocessing.ie

Tidiness and Litter Control / Slachtmhaireacht agus Rialú Bruscair:
It’s good to note that you have had discussions with local farmers re road side damage etc as this is the busy season for silage making and it was noticeable that there were some rather large tractors and trailers on the roads. Also in villages quite a lot of residue from farm related activity can be seen at footpath verges but this was not the case in Abbeylara. Well done on this initiative it’s the first time that the adjudicator has come across his type of cooperation in the years involved in tidy towns judging.
The village was virtually litter free and well done to all, including the junior members of your community, who are involved in litter pickups. The brink banks situated beside the ball alley were fine except that somebody had stuffed a bag on top of the  rubbish bin. That said rubbish bin might be better placed in a different location maybe across the road near green area.
General tidiness was quite good except for  a few back areas, one in particular when exiting on the Coole road, that  were a little untidy and a few pieces of what could be described as rubble were seen in the river near the green.
Overall the standard was good and a further improvement on last year.

Residential Streets & Housing Areas / Sráideanna Cónaithe & Ceantair Tithíochta:
The standard in this category was good and one could see by the presentation of homesteads that in general people in Abbeylara have a pride in their own place. The Rathbeg Estate was quite well presented and the communal green areas were just cut which gave a nice appealing look to this development.
The mostly unoccupied apartment block down the road has already been mentioned in a previous section and we look forward to positive developments by next year. Mastersons Close was also visited and this looked quite presentable as well.

Approach Roads, Streets & Lanes / Bóithre Isteach, Sráideanna & Lánaí:
The adjudicator concurs with the last year’s comments on defining your boundaries as they do not seem to be outlined in your otherwise excellent sketch map. Judging by the map one would assume on the Ballyboy Road that the local GAA Pitch would be the boundary for  that area of the village.Maybe for next year it should be made clear as to where the boundaries for judging are.
The entrances into the village from the main routes Granard and Coole/Castlepollard were very inviting and give a good impression as one enters the village.
Unusually designed stone name signs were complemented by the excellent blue and white signs that one sees in most villages and towns in Longford. Grass margins were cut back in accordance with recommended guidelines and were also enhanced by suitable planters.
The entrance from Ballyboy was a little overgrown in sectors and the road in by the Church was well maintained.
Japanese knotweed notice was observed on the Coole Road and do take notice of the advice as this is one of the most destructive of the invasive plant species.

Concluding Remarks:
It was good to visit Abbeylara for the very first time and avail of the tranquility that prevailed. You have the potential to do even better in the competition in the years ahead and it would be good to see this as Abbeylara is one of the original number who entered the competition all those years ago.