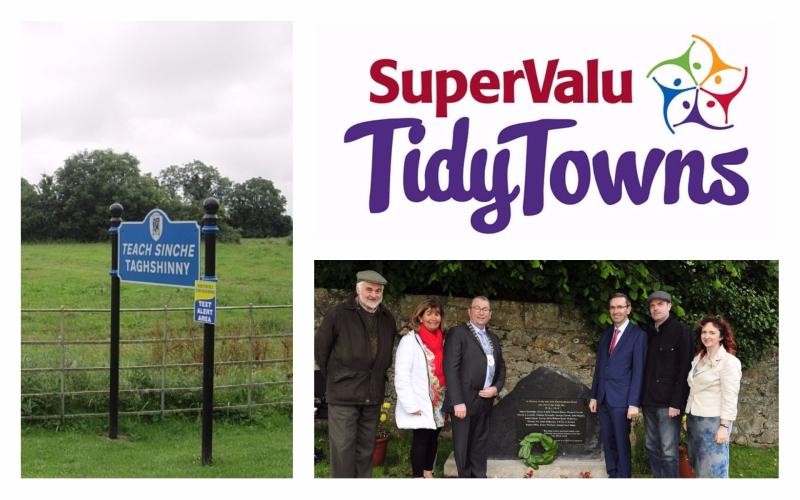 Here's what the SuperValu Tidy Towns 2017 adjudicators had to say about Taghshinny and above are the marks Taghshinny received.

Community Involvement & Planning / Rannpháirtíocht an Phobail & Pleanáil:
Taghshinny is welcome to the 2017 SuperValu Tidy Towns Competition.
Thank you for the excellent hand written entry form complemented by an equally impressive sketch map of the village drawn by the 6th class pupils of the local national school. The submission also included before and after pictorial records of work undertaken plus a very inspiring report on its involvement in the Green Schools Programme from Taghshinny National School.
The 3 year plan is practical in that the action items are achievable and can be done within the given timescales. The committee of 12 is a bit unwieldy for a small place but one assumes that you have an executive comprising of Chair, Secretary and Treasurer at least to oversee the operation.
The number of volunteers that get involved in the work of Tidy Towns in Taghshinny is rather small. You should endeavour to have this number increased over the winter months. Your methods of communication are varied and it is good note that you have a strong involvement with the local National School which is very much involved in the Schools Green Programme nationally. The school pupils are very much involved your spring clean day and also with the planting of summer bedding flowers.
Thank you for your endorsement of the competition and what it means to you as a community.

Built Environment and Streetscape / An Timpeallacht Thógtha agus Sráid-dreacha:
&
Landscaping and Open Spaces / Tírdhreachú agus Spásanna Oscailte:
The work done in this category over the last year is impressive and has been noted by the adjudicator. The Holy Trinity Church of Ireland is a very historic and impressive ecclesiastical building. It was the first time that this adjudicator noted mention of the Anglican Communion on any such Church Of Ireland plaques. Unfortunately they came across the wrong person to give satisfactory answers but one did refer them to the present rector who if memory serves me right lived in Ballymahon.
Road surfaces were in very good condition as one would expect after being upgraded earlier in the summer and the new footpaths as you rightly state make it safe for locals and visitors to walk in comfort. The National School was well presented and has ample grounds and easy access for pupils and adults alike.
The names of those involved in World War 1 from the parish were commemorated in a very simple but attractive  memorial stone. Surnames were an interesting mix Carroll, Rutledge, McBurney, Curran, Cassells and Nugent and were no doubt representative of both religious allegiances of the parish.
Was the Memorial Committee a separate entity from the Tidy Towns Committee? It is interesting to note that Longford County has had large numbers of volunteers who participated in World War 1 and this is reflected in memorials in other villages and towns in the county.
Next year should see the completion of the wall building programme that you have mentioned in your submission. The village has suffered from the downturn as two public houses on opposite sides of the street are closed and one in particular is in poor condition.
One appreciates that this is something outside the control of any voluntary committee but you have been proactive in keeping in touch with owners of the properties to request that they maintain the buildings to an acceptable standard.
Overall the standard was quite good in this category and merits an increase in marks.

Wildlife, Habitats and Natural Amenities / Fiadhúlra, Gnáthóga agus Taitneamhachtaí Nádúrtha:
The National School pupils have certainly been involved in creating an awareness of the local wildlife habitats and the species that live within. It would be good if the findings of all the activities that the school children are involved were published in some form  simple survey.
Then the next objective would be the creation of wildlife information panels that would depict local fauna and flora. You could seek the services of a local wildlife enthusiast and indeed a local artist that could draw up sketches. Getting in touch with the county heritage officer to discuss your ideas and maybe qualify for some funding would be an additional option.
Also do refer to the National Pollinator Plan website for some additional information on the preservation of wildlife that helps the increasing of the bee population.

Sustainable Waste and Resource Management / Bainistiú Acmhainní agus Dramhaíola Inbhuanaithe:
The objective of this category is to reduce the production of unnecessary waste at source. This means that packaging production and other forms of convenience containers should be reduced to get away from dependency on landfill. The projects that are recommended in this category should be relevant to the objective stated.
The Tidy Towns Unit has produced a booklet as part of the overall handbook that will give guidance on how to generate projects. Also the  following websites are also good sources of information www.localprevention.ie www.greenhomes.ie and  www.sustainableprocessing.ie
Having the school involved in the initiatives outlined as part of the green schools programme are very laudable but as a committee you should be doing more to create an awareness amongst the local community of the need to reduce, reuse and recycle unnecessary waste material.
As a matter of interest Taghshinny National School is also very much a contributor to your neighbours Abbeyshrule Tidy Towns Committee’s endeavours and its involvement is well documented in their submission!

Tidiness and Litter Control / Slachtmhaireacht agus Rialú Bruscair:
The pictorial records of your annual spring clean tell the story and this effort has continued over the rest of the year where volunteers engage in regular litter picks around the village and its perimeters. The school once again was to the fore in this work and the pupils efforts have been recognised in your application.
On adjudication day with the exception of one or two small old wrappers there was no litter to be seen. General tidiness was also good with name signs clean and no evidence of fly posting on road sides advertising festival events or country music stars (no names) that this adjudicator has encountered both in Longford and adjoining counties.
Overall the standard was good and merits an increase in marks especially for litter control.

Residential Streets & Housing Areas / Sráideanna Cónaithe & Ceantair Tithíochta:
Taghshinny is lucky in a sense that it is only a small village and didn’t catch the eye of opportunistic developers during the so called boom years.It escaped the legacy of such an era that of unfinished housing developments.
On the day of adjudication all residences viewed, and there were some very impressive ones, were presented to a  very good standard.

Approach Roads, Streets & Lanes / Bóithre Isteach, Sráideanna & Lánaí:
Approach roads into a town or village often form the first impressions of a place for first time visitors. The entrances into Taghshinny, a place with a number of spelling options, are well presented helped in no small way by the excellent blue and white name signs that are seen at entrances to all the villages and towns of County Longford.
The Grass verges, mentioned in a previous section, were in pristine condition and enhanced the entrances no end. The text alert sign at Colehill entrance alluded to in last year’s report has not been re sited and while it’s not totally obscuring the name sign it would be better placed elsewhere at that entrance. For once the adjudicator sees no need for a flower bed embellishment at the entrances as stone walls give a very appealing backdrop. Name and directional signs were clean and very visible.

Concluding Remarks:
It was good to visit the little village of Taghshinny for the very first time. The committee is a very proactive unit and it looks to the future and the village making progress in the competition year on year. You are wished well in the years ahead.