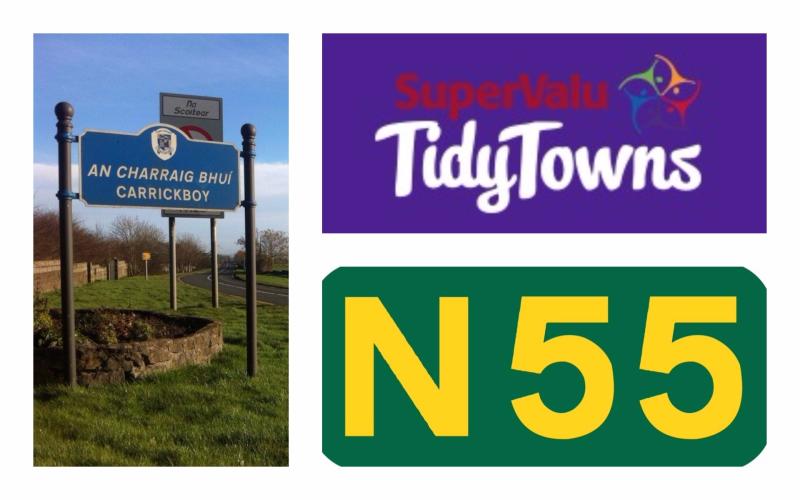 Here's what the SuperValu Tidy Towns 2017 adjudicators had to say about Carrickboy and above are the marks Carrickboy received.

Community Involvement & Planning / Rannpháirtíocht an Phobail & Pleanáil:
Carrickboy is very welcome to the 2017 Supervalu Tidy Towns Competition.
Thank you for the completed application form and sketch map that was part of it. This was the adjudicator's first time to actually stop in Carrickboy as opposed to just passing through on the way north.
As was the case with last year’s adjudicator the lack of a plan, even for two years forward, puts one at a bit of a disadvantage in that there is no work schedule to work to. It’s a pity that you do not have more involvement from other local organisations the more that they are aware of your work the better your chances of getting additional support.
The village is on a busy throughway and it’s hard to control the speed of traffic. The benefit of having a strong committee is that there is more of a chance that you can lobby public representatives and put pressure on for better traffic calming measures at the four cross roads in the centre of village.
Sorry to hear the local school is closed due to lack of numbers it is most disheartening for a community to have that happen.
Thank you for your endorsement of the competition.

Built Environment and Streetscape / An Timpeallacht Thógtha agus Sráid-dreacha:
As stated in the introduction the loss of a school can be disheartening for any community as the local school is part of the social fabric of any village or town. It also brings parents together and various discussions about community issues take places often followed by actions down the road.
There is no mention in this section of any proposed plans for the now vacant school. The committee may be in a position to make approaches to the former board of management or the Department of Education to see if the building could become a community resource centre of sorts.
The village is free from overhead wiring and this does away with unsightly criss crossing of wires across the street. The main commercial business Quinn’s was well presented and it’s good to see that the other mainstay of any community The Post Office is still in existence.
The road surfaces and the standard of footpaths in the village were good as one would expect on a main road.
Private properties were also well presented on the day and credit is due to the local residents for the effort they put into making sure of this. Some post and rail fencing on the north side of the village could do with painting and this would make a big  difference in adding some vibrancy entering from that side of the N55.

Landscaping and Open Spaces / Tírdhreachú agus Spásanna Oscailte:
One notes from your input in this category that because of your lack of numbers it takes quite some time to maintain the landscaping and grass cutting in what is a large area. Hopefully over the coming autumn and winter months you may be in a position to expand your volunteer core to help you with this task next year.
The idea put forward in last year’s report of having a simple landscaping plan for the village is one you should follow through on. Get in touch with the local county engineer for your area and he or she will be able to direct to the proper section of  the council. Also lobby your local public representatives.
The grass margins were cut very well and the planting arrangements seen on the outskirts of the village were very effective. The village could benefit from a dedicated planting plan to supplement what is already in place. Maybe for next year’s application you might have started the ball rolling by making contact with the local engineer as  suggested.

Wildlife, Habitats and Natural Amenities / Fiadhúlra, Gnáthóga agus Taitneamhachtaí Nádúrtha:
It would be advisable to consult the Tidy Towns Handbook for advice on how to go about developing a wildlife project that would encapsulate the wildlife habitats that are part of your area. For instance this year there is a particular emphasis on swifts and the worry that the population of breeding swifts will decline. Maybe one of the committee could attend the talks on swifts that are being held around the county and find out how you could contribute to encourage their survival in your own area.
If you have someone in the community with a good knowledge of wildlife and biodiversity he/she could be asked to help you to devise a simple wildlife plan.

Sustainable Waste and Resource Management / Bainistiú Acmhainní agus Dramhaíola Inbhuanaithe:
This is a category that has caused difficulty for communities when it was first revamped some years back. The Tidy Towns Unit produced a booklet last year that clearly explained concept and advised on how to get involved by setting up relevant mini projects.The main objective of this category is to spread the message of reducing the production of waste at source. This is all the more important now as landfill options for disposal of waste are becoming less and less.
The following websites are good sources of information also www.localprevention.ie www.greenhomes.ie and www.sustainableprocessing.ie
What you have mentioned in your submission fits very well with the objectives of the category.

Tidiness and Litter Control / Slachtmhaireacht agus Rialú Bruscair:
The standard of litter control on the day was quite good and the efforts that you have made to make sure the village is litter free are paying off. Yes indeed the bane of any village on a main throughway is the indiscriminate way that passing  motorists throw litter from cars in the form of cigarette butts, sweet wrappers and in some case cardboard cups and boxes.
The bins outside the shop were noted and the area around them was tidy.
General tidiness was also good with a few exceptions such as one or two side yards and over grown patch of ground near the main junction on the Cavan/Edgeworthstown side of the village. Overall the standard was good and merits an increase in marks.

Residential Streets & Housing Areas / Sráideanna Cónaithe & Ceantair Tithíochta:
The area at the junction of the Mullingar and Edgeworthstown side of the N55 has been noted and was visited by the adjudicator. You are wished well with the future plans for this particular section of the village.
Overall the standard of presentation of private residences was very good and all were clean and tidy. Well done to the local residents for keeping individual properties in good condition as it is not easy on such a busy road as the N55 which has a huge volume of truck traffic passing through.

Approach Roads, Streets & Lanes / Bóithre Isteach, Sráideanna & Lánaí:
Your work on making sure that the grass margins on the outskirts of the village on all four entrances were maintained to high standard deserves the highest of praise. This is a hard job as the area to be covered is quite large and the fact that you have few enough numbers makes it more difficult.
The adjudicator would concur with the comments expressed in last year’s report on traffic calming. At times it must be frustrating to have all this traffic passing at through your village at high speed with in many cases no adherence to speed limits.Let’s hope some additional effective traffic calming measures will be put in place.
The standard of presentation from all roads into the village was good and can be further enhanced by simple painting of post and rail fencing and some additional flower planters on the Mullingar and Longford entrances.

Concluding Remarks:
It was good to be able to take the time to judge your village and actually get to know the area. Usually the adjudicator is one of those commuters that pass through Carrickboy maybe twice or three times a year. It is a very nice village in a rural setting sometimes the tranquility can be disturbed by bouts of heavy traffic which the residents are used to.
You are wished well in the future.