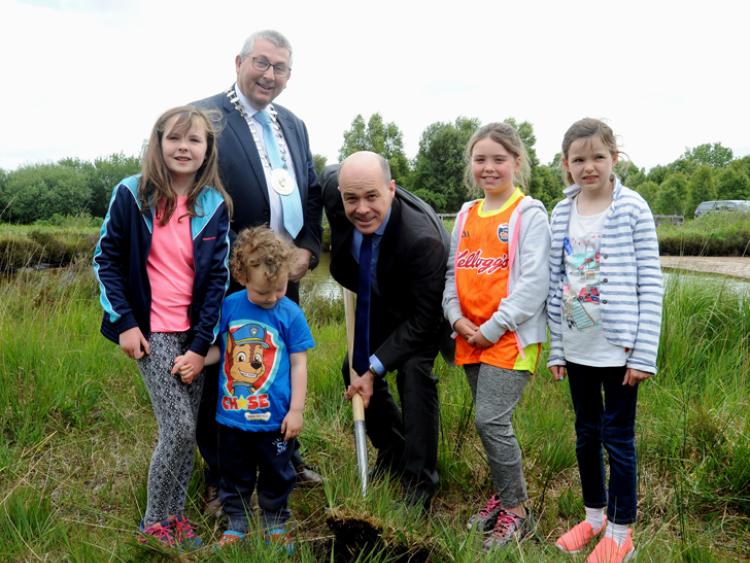 Corlea Trackway Visitor Centre, Kenagh, was buzzing on Friday June 30 last as large crowds showed up for the ‘Turning of the Sod’ ceremony for the new walkway around Corlea Bog.

Proceedings kicked off at 11am in the Visitor Centre, with speeches by Senior Planner for Longford County Council Donal Mac An Bheatha; Minister for Communications, Climate Action and Environment Denis Naughten; Minister for the Office of Public Works Kevin ‘Boxer’ Moran; Chief Executive of Longford County Council Paddy Mahon; Head of Peat with Bord na Móna Paul Riordan; and Cathaoirleach of Longford County Council, Cllr Mick Cahill.
“The reason that I wanted to come here today was because of these three girls and this boy here,” said Minister Naughten on the day, gesturing towards a group of children in attendance.
“Because these three girls and this boy in 50 years time will be able to tell their children and their grandchildren that they were here when we took this first step into the development of this fabulous project.
“We’re talking about 18,000 hectares of cutaway bog between here and Tarmonbarry on both sides of the River Shannon. And because we had the support of Dáil Éireann and the team at Bord na Móna and the National Parks and Wildlife Service, we are going to make this a reality.
“This is going to be one of the major recreational amenities, not just in this region, not just in this country, but in Northern Europe.”
Along with the new walkway launched in Ballymahon as part of Center Parcs last week, this new trackway is going to improve the tourism sector in Longford immensely.
“People will, in years to come, come here to the lakelands for their destination holiday. They’ll come from all over Europe to come to here to spend a fortnight here and nowhere else to actually explore what we have to offer here.
“And I think this is the first step in relation to that. And these four,” he said, gesturing to the children once more, “will be able to tell the generations to come that they were involved in this.”
The sentiment was shared by Minister Naughton’s colleague in the Dáil, Minister Kevin ‘Boxer’ Moran, who said that when he moved to Dublin to work in government, it was very important to him that he did everything in his power to support the project in Corlea and to ensure that Longford's tourism sector was given a well-deserved boost.
“It is also a first key step in delivering the Mid-Shannon Wilderness Park to the region. I am convinced that a bright future is ahead for the Corlea project and I wish it every success,” he added.
Cathaoirleach, Cllr Mick Cahill also agreed.
“The new amenity walk will enhance the Corlea Trackway Visitor Centre,” he added.
“It was one of our aims from the outset that we would bring more people to the centre and create a very special tourist attraction in Longford, which this will do,” he said, before adding that the tourism and economic potential of the project will secure jobs in the area in the future.
Speeches were followed by the ceremonious ‘turning of the sod’, carried out by Minister Naughten, before those in attendance made their way down to the start of the beautiful new walkway, where Minister Naughten cut the ribbon and - joined by locals and politicians alike - started to walk along the track.
At present, the walkway is being constructed through 70 acres of cutaway bog surrounding Corlea Trackway Centre.
This walkway will run through an area of bog, which Bord na Móna is currently managing to return to a natural and semi-wild condition.
The walkway natural area will add to the attraction of the Corlea Trackway Centre, which consists of 30 acres of natural bogland area.
When completed, the project will provide the county with a total of 100 acres of a bogland park, set within a natural setting of lake, bog and forest, providing very important refuge for wild animals, plants and birds.