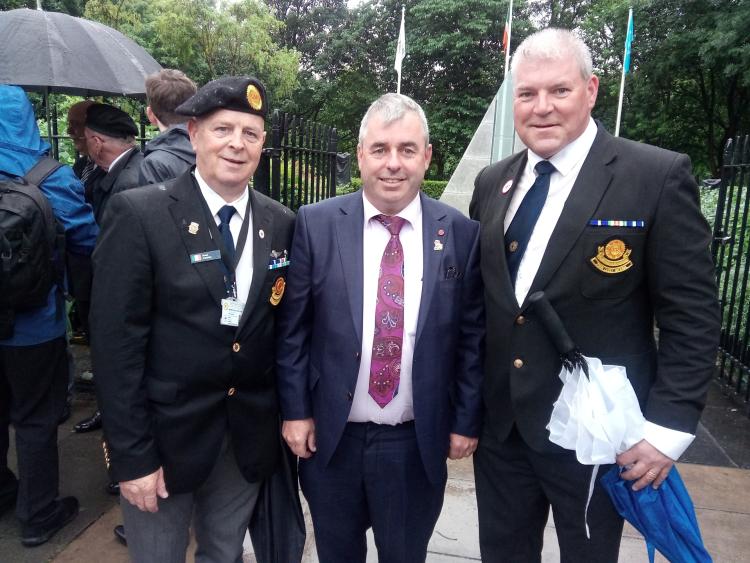 Minister of State for the OPW and Longford/Westmeath TD, Kevin ‘Boxer’ Moran is pictured with ONE members, Paul Cooley, Athlone ONE and Derek Ryan, Mullingar, at the launch of the Fuchsia Appeal 2017

Minister of State for the OPW and Longford/Westmeath TD, Kevin ‘Boxer’ Moran is urging the public to support the annual Fuchsia Appeal which raises much needed funds for the Organisation of National Ex-Service Personnel.

“I would strongly urge the public to support this very worth appeal. The main drive of the appeal takes place during the month of July which is the month of the National Day of Remembrance,” said Minister Moran.

“ONE do tremendous work in coming to the assistance of those retired Defence Force personnel who need help including in the area of providing accommodation,” said Minister Moran.

ONE officially opened Custume House at Bonavalley, Athlone in November 2006 and is a seven bedroom facility.

“ONE need around €600,000 annually to keep its current residences operating, including at Athlone and making the Fuchsia Appeal all the more important each year,” said Minister Moran.

“It must be remembered that our retired Defence Force personnel gave outstanding service to the State and to the United Nations. It is only right and fitting that those who require our help have their welfare needs looked after,” said Minister Moran.