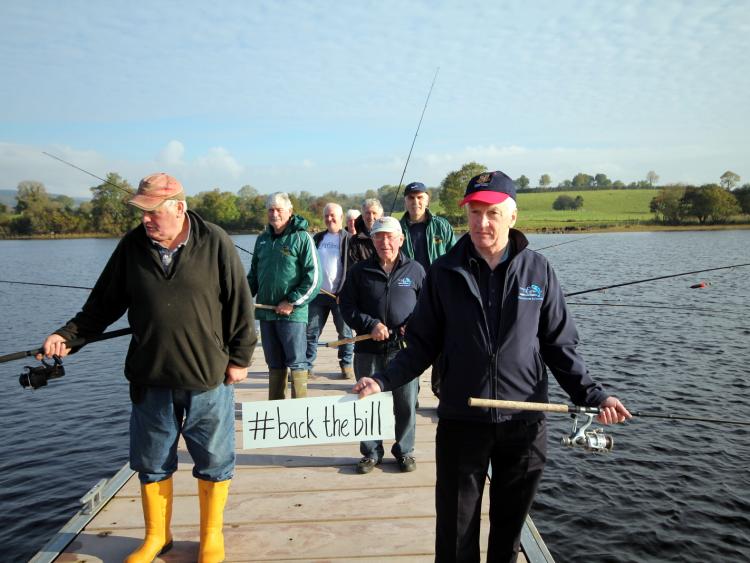 Fishermen taking part in the 'Back the bill campaign on Lough MacNean, Blacklion, Co Cavan at the weekend. Photo by Tony Griffin

Love Leitrim has welcomed the passing of the legislative ban on fracking as it completed the final stage in the Seanad and will now be sent to the President to be signed into law.

Love Leitrim’s spokesperson Eddie Mitchell acknowledged that the community campaign had won by informing themselves about the issue, lobbying local and national representatives and by promoting the positive aspects of Leitrim and Ireland.

Speaking on Wednesday, Mr Mitchell explained, “As a small community it was a fight for its life. We have a right to live in a safe place. People didn’t have a choice but to get involved, this is our home, where our families are from, where our people are buried and these fields are the place where our children play.”

Mr Mitchell added, “Seeing the plight of communities in Canada and Australia acted as a warning for us, they showed us that you could stand up and make a change and be successful like communities in New York. We couldn’t afford to lose everything that was dear to us just like we saw others losing what was important to them.

Describing the successful strategy behind the Love Leitrim campaign, Mr Mitchell said,  “We did it by engaging the community, through participation and empowerment. We are proud of where we are from. We are proud of Leitrim and Ireland. We wanted to reflect what Leitrim was about, farmers, fishermen, artists, professionals, parents and about sustainability. This is about Ireland. We knew we wouldn’t win unless we brought everyone along. We understood that we had to convince everyone. We knew that we had to be non-political. We had to win over hearts and minds.”

He stated, “We by nature are close to the land and maybe we have become watchdogs like our parents before us. We have a responsibility to the land and each other and the life that the land nurtures. We feel privileged we can make a difference in our own small way in dealing with bigger challenges. We all have to be able to come together for the biggest fight the planet now faces, climate change. We hope that our successful campaign here will be a catalyst for other communities and show what can be achieved.”

The Petroleum and Other Minerals Development (Prohibition of Onshore Hydraulic Fracturing) Bill 2016 will now enter into law after passing Committee Stage in the Seanad on Wednesday afternoon (June 28).

The Environmental Pillar - a coalition of 26 Irish environmental NGOs - says the decision will help safeguard our water quality, natural environment and the health and well-being of communities across Ireland.

The Pillar is delighted that the Bill can now be added to the burgeoning global move against fracking, and highlight to the world Ireland’s acknowledgment of the significant risks and negative impacts associated with unconventional fossil fuel extraction.

The Bill brought by Sligo-Leitrim TD Tony McLoughlin has received widespread support from across the political spectrum and was the first private members Bill to pass through the Dáil.

The historic move now puts Ireland in the top tier of the global movement to ban fracking, becoming only the third European country to ban the practice after France and Bulgaria, and is an important marker of our commitment to tackling climate change and moving to a sustainable low carbon economy.

Aedín McLoughlin, Environmental Pillar spokesperson and GEAI Director said, "We are delighted with the decision which makes it very clear that the risks associated with the deeply damaging practice of fracking are just too significant to ever let it take place here.

"The long road is travelled and we have come successfully to its end. For six years we have looked forward to this day, when the Irish government would ban fracking and protect our rural environment and communities from this industry that poisons drinking water and air.

“We congratulate everyone involved - our fellow campaigners who never gave up the struggle to make this issue a national one; our local and national representatives who spoke out against fracking in Councils throughout Ireland as well as the Dáil; and our TDs and Senators who unanimously supported the Bill.

“Ireland may now hold its head high as it joins the ranks of countries that have banned fracking."