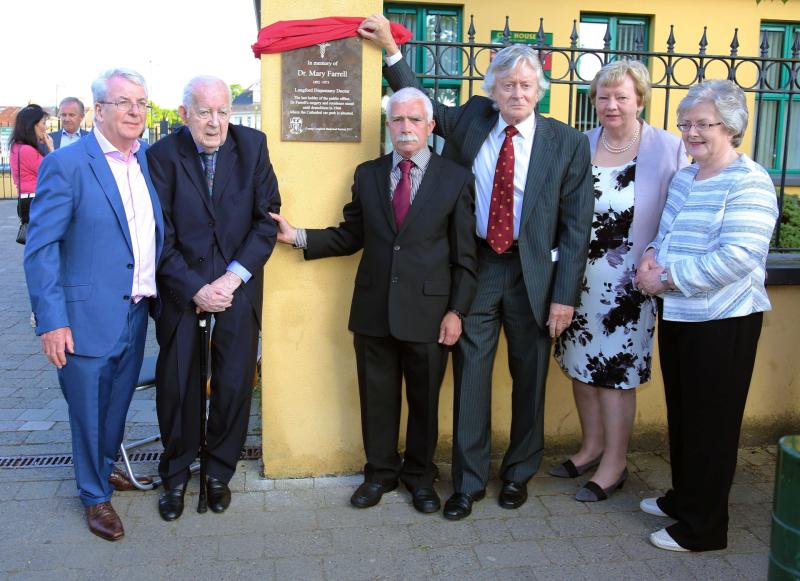 A plaque commemorating the life and times of Longford doctor, Dr Mary Farrell was unveiled at the College Medical Centre, Ballinalee Road in Longford town recently.

The event was organised by County Longford Historical Society and the Farrell Family, with the support of Dr Mel Gorman and his colleagues at the medical centre.

The unveiling was performed by Dr Gerard McDonagh, who served as a GP in Longford for several years and this was followed by a reception at the nearby Temperance Hall.

Ms Hughes was given access to Farrell family papers and also conducted extensive research in local newspapers and the minutes of Longford County Board of Health and Public Assistance.

She told those in attendance that Dr Farrell (1892-1973) was the daughter of James P Farrell MP, owner of the Longford Leader.

“She had a brilliant academic career in UCD, where she graduated with honours and pursued post-graduate studies in the 1920s,” continued Ms Hughes.

“After periods of work in England, West Africa and Waterford, she took the position of dispensary doctor in Longford in 1930.”
Those attending the ceremony went on to hear that other aspects of Dr Farrell’s work included her treatment of veterans of the First World War; her care of TB patients and her work with the Travelling community.

Bringing proceedings to a close later, Lucius Farrell who represented his family on the night spoke warmly of Dr Farrell who had been his aunt and mentor.

He also recalled her love of reading and cigarettes!

The plaque is the first of two that the historical society will erect in this its 50th anniversary year.

The other one, to be unveiled in September, is a plaque to JP Farrell, Dr Farrell’s father.

It was erected on the Market Square in the late 1990s, but had to be removed from its original location due to construction works.

The plaque will be re-erected at the entrance to the offices of Longford County Council on the square on a date yet to be confirmed next September.