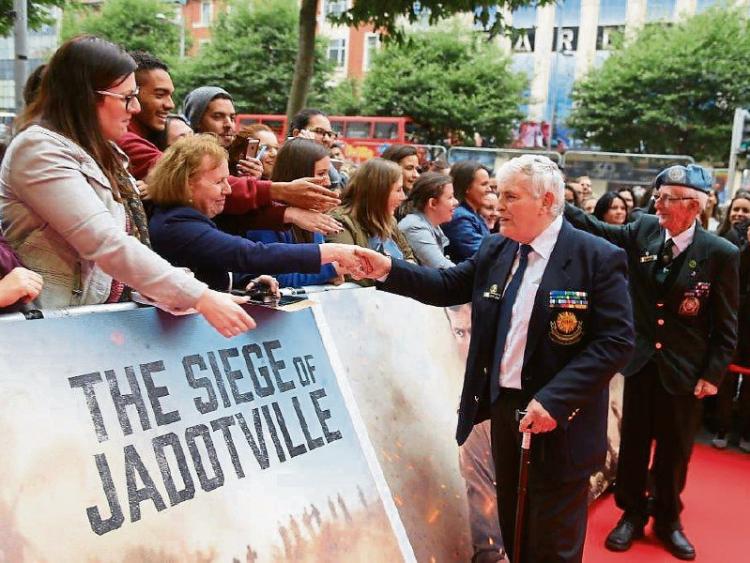 Longford Jadotville veteran Michael Tighe on the red carpet at the premiere of 'The Siege of Jadotville' film.

Senator Gabrielle McFadden has urged Minister Paul Kehoe to recognise each of the Jadotville soldiers on an individual basis. Her call came during a Seanad debate on Defence matters and is an issue upon which she has been working for a number of years.

“I appeal to the Minister to award an individual citation and a medal to each of the soldiers of A Company, 35th Infantry Battalion who were involved in the Siege of Jadotville. While the unit citation was a recognition of their collective heroism and professional performance, I believe that each of them deserve individual acknowledgement.”

In September 2016 on the 55th anniversary of the siege of Jadotville, a unit citation to honour the collective actions and bravery of the men of A Company was presented at a special ceremony in Custume Barracks, Athlone.

During the ceremony a copy of the citation was presented to each member of the unit or next of kin in the case of deceased members. This was the first time a unit citation was awarded within the Defence Forces, but Senator McFadden believes that each member also deserves individual acknowledgement and has written to the Minister, as well as raising it in the Seanad to urge him to progress this issue.

Meanwhile, Senator McFadden has also called on Minister Kehoe for an increase in the Military Service Allowance.

“Could I ask the Minister to consider the case for an increase in the Military Service Allowance which is payable to all Defence Force personnel.  It is intended to compensate servicewomen and men for the “unique conditions and special disadvantages of Military life” which are acknowledged by the Department of Defence in their own initial submission to the Public Pay Commission.  An increase in this allowance would benefit all personnel equally, but would not impact on the wider public service as it is a “sector specific allowance”.

“We need to ensure that military service is an attractive career option for young men and women.  Currently, enlisted recruits are among some of the lowest paid public employees, with basic salary starting at just over €18,000.  Indeed, many rely on Family Income Support and other State supports and I think that this is totally unacceptable.”

“I am aware that the Minister has been working hard to address this with 860 personnel being recruited this year on top of the 690 taken in last year.  But recruitment alone will not solve the problem unless retention of our most experienced staff is also tackled”

“As we move towards the centenary of the establishment of the National Army in 1922, we must put in place the structures and the funding necessary to ensure that Óglaigh na hÉireann are motivated and resourced and can start into their second century ready to meet the needs of a changing Ireland.”