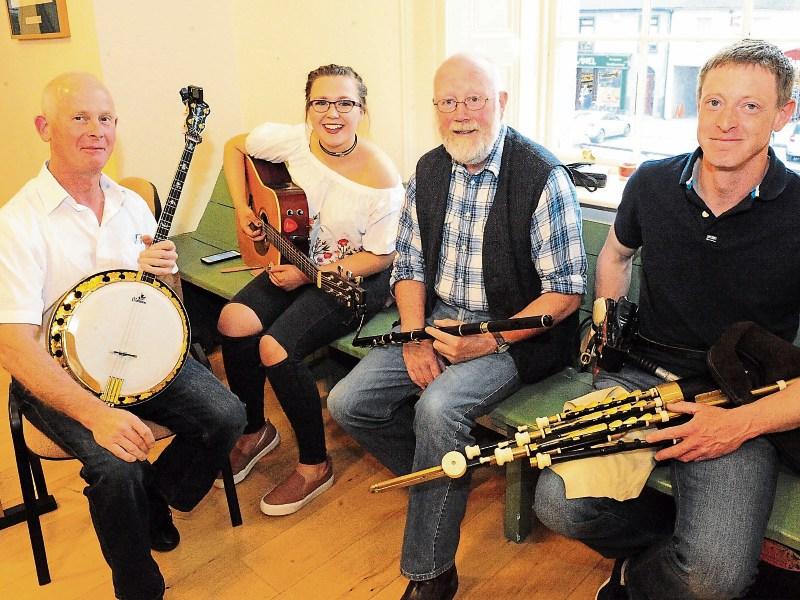 A special reception was held in  Ballymahon Community Library on Thursday May 11 last, to celebrate an enjoyable week with a group of visitors from Ballymahon’s twinning town of Landévant in France.

The group of 23 French visitors arrived from their small town, which is near the city of Lorient, on May 6 and stayed with host families in the south Longford area until May 13.

The Ballymahon Twinning Committee organised a detailed week of events for the group, including a trip and talk on the Royal Canal between Ballymahon and Abbeyshrule, with a trad musical session on the canal and an evening of wine and food in the Rustic Inn.

Also on the programme was a historic trip to Northern Ireland, where they were invited as guests to Stormont Castle. They also visited the Titanic Centre, City Hall in Belfast and a variety of other historic locations.

The group also learned some Irish dancing at local set-dancing workshops, and took part in a variety of other cultural evenings.

“We’ve had an absolutely fantastic week in the company of our friends from Brittany,” said Secretary of the Ballymahon Twinning Committee, Arthur Conlon, at the Civic Reception on Thursday evening.

“We’ve put together what has been generally agreed to be an excellent week of events. The formal, timetabled programme of events have been most enjoyable and have showcased some of the best of Ballymahon, of Longford, of the Irish midlands and indeed of the whole island of Ireland.

“However, possibly even more important than the formal events have been the countless, unplanned and unscripted interactions that have taken place over the last week.

“And these have showcased the essence of cooperation, of friendship and of the really genuine goodwill and affection that exists between the communities of Ballymahon and Landevant.”

The Civic Reception last week was hosted by Longford County Council, and was attended by a number of local councillors.

Wine, food and refreshments were provided for those in attendance and guests were treated to performances of traditional music from local musicians.

“We are very proud of our town and the twinning arrangement between our towns, which began in 2001 and remains strong ever since, due to the commitment of the people in both countries,” said Cathaoirleach of Longford County Council Mick Cahill, referencing the hard work of Chairperson of Ballymahon Twinning, Breege Murray, and the rest of the committee.

“The most important aspect of town twinning is the fact that it creates direct links between the people and, as a result, friendships and a better understanding of each other’s culture and way of life.

“I know that many people have visited Landevant from this area, and enjoyed the warm welcome and beauty of your town.”

Overall, it was a successful week for both twinning committees, visitors and host families, who thoroughly enjoyed strengthening the bond between Ballymahon and Landévant.