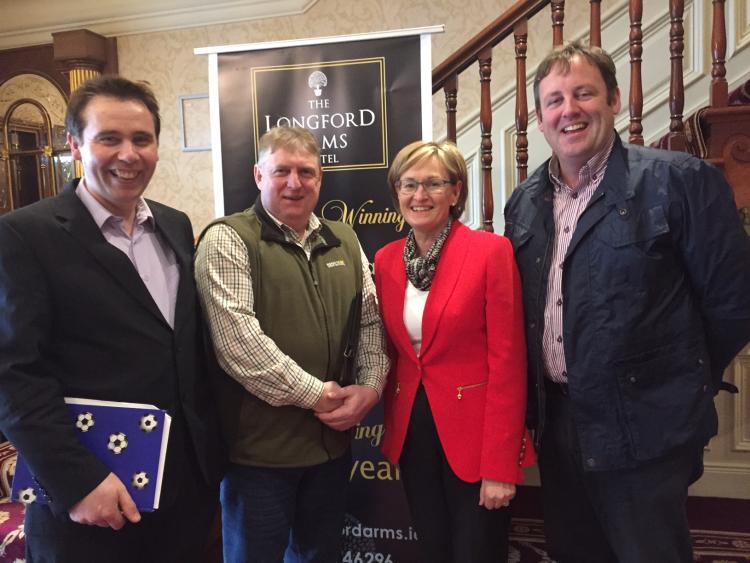 Representatives of from the Irish Natura and Hill Farmers Association (INHFA) met with Mairead McGuinness MEP in the Longford Arms Hotel where they discussed the issue of Areas of Natural Constraint (ANCs).

Agriculture Minister, Michael Creed, has confirmed in a letter to Mairead McGuinness MEP that membership of the Monitoring Committee for Ireland’s Rural Development Programme (RDP) 2014 to 2020 for the Irish Natura and Hill Farmers Association (INHFA) is currently under consideration.

The Minister also confirmed that a decision on extra funding for Areas of Natural Constraints (ANCs) is not yet complete and awaits an analysis of technical data for the design of a new ANC scheme with new eligible lands designated.

“I very much welcome that the Minister has these issues under active consideration in his Department,” Ms McGuinness said. “These farmers have particular concerns because they operate in areas with the most severe biophysical constraints.”

Ms McGuinness added, "The Minister pointed out that the 2018 scheme will involve the design of a new scheme with new eligible lands designated using a set list of biophysical criteria and new rates of payment.

“He confirmed that an additional €25m is available for the scheme next year and that this money could be used to provide degressive payments to those farmers who no longer qualify under the new criteria.

"This is a contentious issue as many farmers in very difficult areas believe that additional funding should be targeted to meet their needs."

A decision on any required additional funding is not expected until the ANC re-designation process is complete and there is a clearer picture of the results of the process.

“The review of the ANCs is a major issue for thousands of farmers and there is pressure from those farmers in the most disadvantaged regions for higher payments, given that the areas in which they farm are difficult and have limited options and low incomes,” McGuinness concluded.

You may also wish to read: