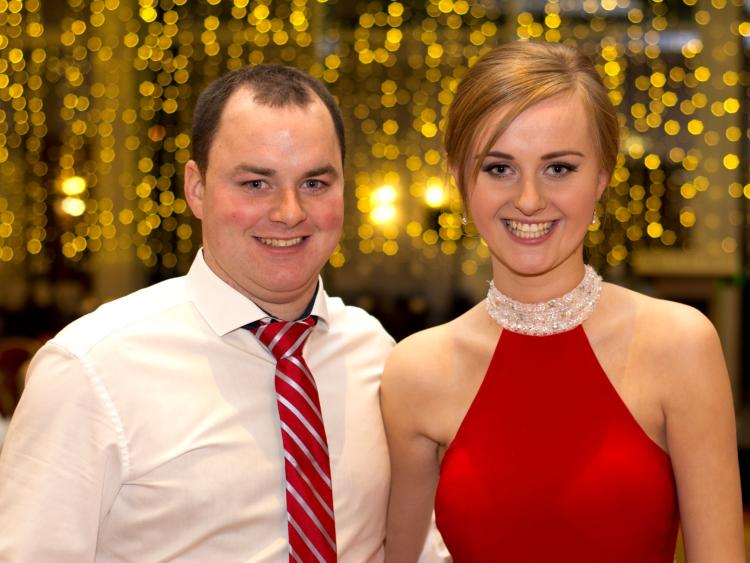 Paul Molihan from South Longford Macra club, who was paired with Leitrim Queen Karrina Johnson, and Shauna Mulhall from Lanesboro Macra club, who was paired with Monaghan King Daniel Hawthorne, enjoyed a fantastic time at the 10th Annual Northwest Macra Kings and Queens event and were joined by a huge crowd of supporters from Longford Macra on the night.

Congratulations to North West Macra's newly crowned King Alan Anderson from Sligo and Queen Victoria Byrne from Donegal. Paul and Shauna were joined by Kings and Queens from each of the 9 counties of the North West region at the Sligo Park Hotel.

The Kings and Queens enjoyed lunch before being paired up. They then took part in a number of novel activities which tested their creativity, knowledge of each other and their capability to work as a team including designing and making a crown, penning a “Macra Poem”, a treasure hunt, testing their teamwork with “The Cube” based games and finally a Mr and Mrs type quiz.

The couples were being watched and judged by last year's North West King Paddy Mahon from Galway and Queen Miriam Hastings from Roscommon.

At 7.30pm the Kings and Queens dressed up in their royal finery and enjoyed a wine reception with the event's organising committee and special guests.

All the Kings and Queens were then invited and welcomed on stage by the MC and DJ for the night Brendan Roache to meet the massive crowd of nearly 400 people who had gathered for the banquet including Macra's National President Sean Finan and Macra's new CEO Denis Duggan.

Brendan interviewed the nine royal couples between the courses of the delicious meal asking them about the tasks they had undertaken in their royal pairings and the couples also recounted some of their embarrassing and memorable moments. Finally the results were announced eliminating five of the couples to reduce it down to the final four.

The final result was announced and Alan from Sligo and Victoria from Donegal were absolutely thrilled and delighted to be crowned North West Macra's King and Queen 2017. They each were presented with their crowns and a cheque for €200.

Celebrations continued long into the night with the dance floor rocking until the early hours thanks to DJ Brendan Roache providing an excellent mix of music for all tastes.

Northwest Macra Vice President Caroline O’Dowd, who is also Chairperson of the organising committee, thanked everyone who attended the event and also thanked last year's winners Miriam Hastings and Paddy Mahon, all the 2017 Kings and Queens and all the past winners and their guests. She congratulated Victoria from Donegal Macra and Alan from Sligo Macra who were crowned this year's winners.

She thanked the Sligo Park Hotel, the MC / DJ Brendan Roache, the photographer Darran Smyth, the cake maker Deirdre McMorrow and Training Officers Siobhan Sexton and Ciara McDonnell for all their hard work and support and all the volunteers who helped out in the preparations for and during the event especially committee members Olive Hannigan, Miriam Lynch, Sharon Corcoran and Charlotte Mc Loughlin.

She concluded by saying she was very proud to be Northwest Vice President for the 10th year of the Kings and Queens and hopes it continues on from strength to strength.