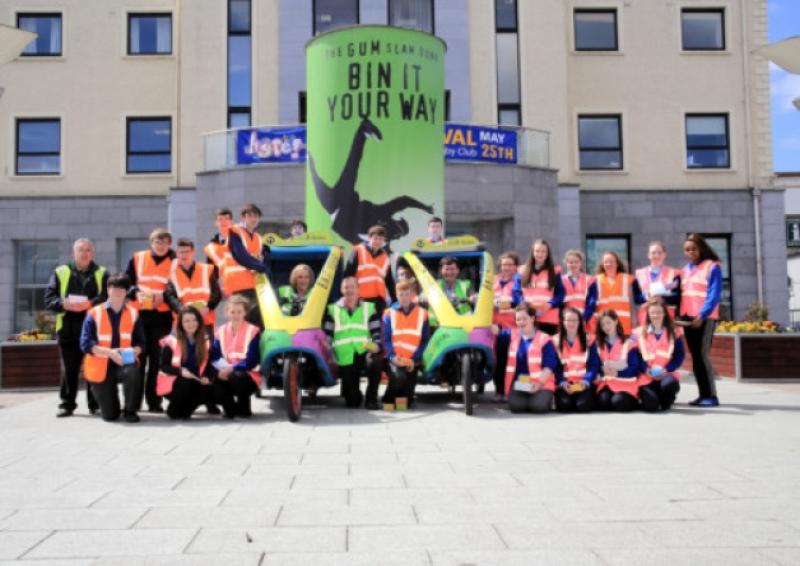 Longford is doing its bit to tackle a sticky problem!

Longford is doing its bit to tackle a sticky problem!

As part of the 2013 Gum Litter Taskforce (GLT) National Environmental Awareness Campaign, a local campaign striving to clear the street footpaths of chewing gum has been launched.

This initiative to rid Longford’s streets of unsightly sticky gum is being headed up by County Council Environmental Awareness Officer Gary Brady and it was launched at Market Square on Friday last.

The campaign focuses on encouraging people to be more responsible about the disposal of chewing gum and to make them aware of the effect that it has on the environment.

Cllr Farrell explained that gum litter was a major issue, adding “congratulations to the County Council and Gary on the initiative. Hopefully the publicity generated will highlight the problem.”

Cllr Nolan suggested that in keeping with the campaign’s theme of ‘Bin it Your Way’ a countywide competition involving students should be organised. Mr O’Dowd was quick to point out the cost of removing gum on the streets, and he hopes that the campaign will “bring an awareness to the people of Longford about the damage chewing gum can cause”.

Transition Year students from Meánscoil Mhuire and St Mel’s College took to the streets in pedal-cars, handing out gum wrappers, pens, posters and leaflets to help raise awareness about the issue.

The campaign has been going on nationwide for years, explained Gary Brady, and this is Longford’s second time to participate. As part of the campaign, the three groups involved are hoping to partially clean Ballymahon Street, removing chewing gum from half of the street.

It is thought that to clean up this relatively small area, it will cost somewhere between €1,500 and €2,000, which shows how costly the improper disposal of chewing gum can be. When the section is cleared, the groups will then monitor the situation and carry out surveys to see how effective the cleaning was.

The improper disposal of chewing gum is a huge problem both locally and nationally, and those found guilty can face a fine of €150. A booster campaign to further raise awareness on the issue will take place this summer during the Love Longford festival. For more information on the Gum Litter Taskforce and their work, visit www.gumlittertaskforce.ie.