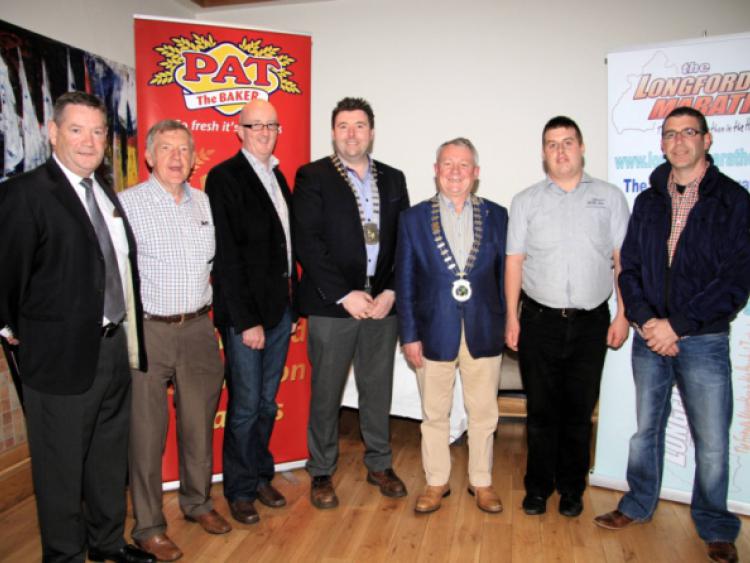 And those in attendance at the launch of the 2015 Pat the Baker Longford Marathon which takes place on Sunday, August 30 heard that on average 300 athletes participate in the full marathon and 500 in the half marathon annually.

Organising Committee Vice Chairperson John Sheehan explained that over the past thirteen years, Pat the Baker Longford Marathon competitors have run 366.8 miles, with the addition of the half marathon miles bringing the total up to 537.1. Volunteers have handed out 140,000 drinks of water and over 15,000 medals and tee shirts.

Mr Sheehan said the committee were fortunate to be able to call on the assistance of numerous volunteers who toil in the background. “The statistics illustrate the mammoth work of stewards, water station assistants, pacers, Gardaí, civil defence, council workers and sponsors who all contribute to making the Pat the Baker Longford Marathon the well regarded event that it is.”

There is a significant international dimension to the marathon and Mr Sheehan explained that Longford County Council have acknowledged the national and international importance of the event. “This year participants from 14 countries have confirmed that they will be taking part and that this has an important tourism spin off.”

He extended thanks to St Mel’s College who provided the Longford Marathon headquarters for the last number of years and this year The Longford Arms Hotel will be HQ, with parking for the event available in the old Army Barracks.

Deputy James Bannon stated that the Pat the Baker Longford Marathon is an important tool in the promotion of Longford at home and abroad and that its reputation as “the friendly marathon in the heart of the country” is apt as it reflects the great community spirit in Longford.

County Council Cathaoirleach Gerry Warnock said the two factors instrumental in the continued success of the marathon were the support of the sponsor, Pat the Baker, and the dedication of the organising committee.

Longford Municipal District Cathaoirleach Seamus Butler said the Longford Marathon has a role in portraying a positive image of the town and county. He said it was one of the best regarded marathons and that all participants had a very positive experience and that this was a tribute to the committee.

There is a charitable element to the marathon and representing St Christopher’s Services, Donal Drake said that since 2002 they have benefited to the tune of almost €200,000 and that this funding is vital to their work.

Michael Meaney of Pat the Baker said the Granard based company was delighted to be in a position to offer continued support to the Longford Marathon.

Mr Meaney remarked, “This is the sixth year we have been a part of the event and Pat the Baker’s continued involvement was made easy by the friendliness of all involved. We are looking forward to supporting the marathon in the future in the way that Longford people support their local bakery Pat the Baker.”

In the lead up to the marathon, there is a 5km ‘warm up’ road race on Thursday, August 27.

While the 39.3 mile Ultra Marathon and Marathon Walk start at 8:30am on Sunday, August 30 and the Marathon, Half Marathon and Relay Marathon all start at 10am.

For more on the 14th Pat the Baker Longford Marathon check out www.longfordmarathon.com