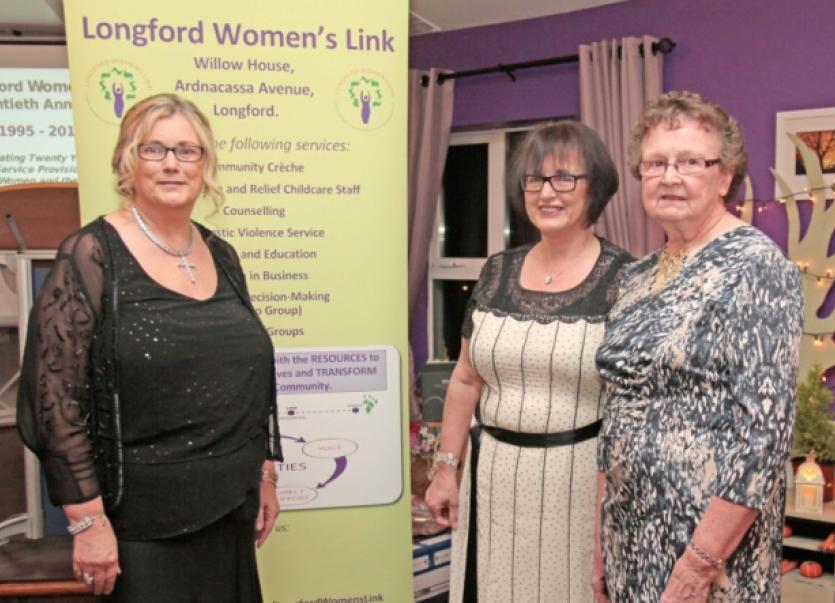 The event saw over 150 people gather in the venue to mark a milestone birthday for an organisation that has been changing the lives of Longford women, and their families, for two decades now.

No gender quota was needed on the night as quite a few men attended the event including staff members and supporters of Longford’s most prominent social enterprise.

Speeches were kept to a minimum but one of the highlights of the night was a special video by Patrick Baxter and Deirdre O’Byrne on the history of Women’s Link and on the work of the organisation in Longford today. The story of the how this innovative organisation actually got off the ground was told on screen by the people who were involved from the early days including founders Tess Murphy and Elsie Moxham as well as Cllr Mae Sexton who was instrumental in getting the site for the women’s centre at the time.

A very proud Mae Sexton was in the audience on the night as was Cllr Peggy Nolan who had just the day before successfully passed a motion calling on Longford County Council to hold a civic reception for Longford Women’s Link to mark its 20th anniversary.

CEO of Longford Women’s Link Louise Lovett thanked sponsors and supporters of LWL, and she reflected on the the continued work of the organisation.

Chairperson of Longford Women’s Link Stephanie Igoe made a presentation to founders Tess and Elsie and their late co-founder Mary O’Hara was also remembered on the night.

Indeed it was notable that many people who had been instrumental in LWL over the years attended on the night including Lorne Patterson and Lily Gilchrist who facilitated the women’s enterprise programme as well as former board members Gen Doherty, Jackie Greene and Mae Campbell, to name but a few.

Thomas Igoe took to the stage to sing a wonderful song he had penned in memory of trade union activist Rosie Hackett.

He told the audience that he had written the song after being told by his wife “to write about a woman” and he was inspired by the story of Rosie Hackett.

After a lively evening, the celebrations continued into the night with the inimitable Paschal, Liz and Davey who kicked off proceedings with ‘Good Hearted Woman’ for the evening that was in it.