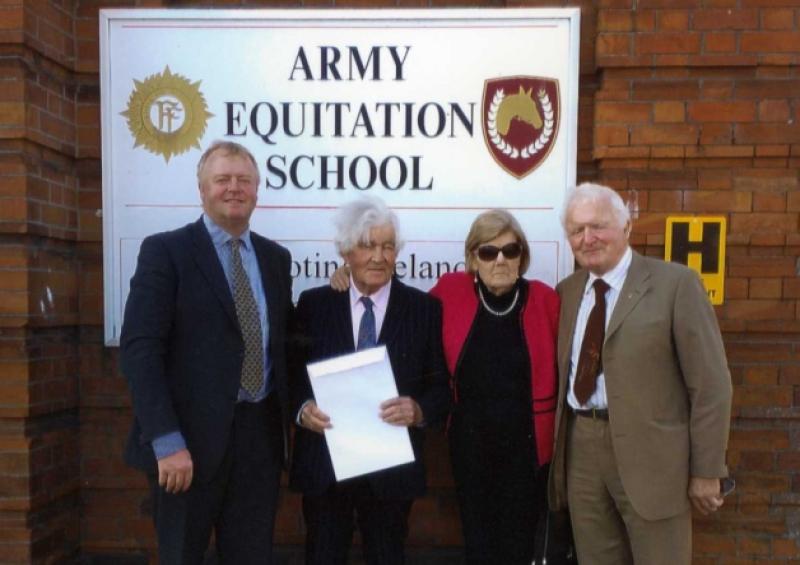 Brian has been part of the organisation for the best part of 60 years, since its formation in 1954.

“I’ve been showjumping all my life,” he smiled when speaking to the Leader on Friday.

“I have been involved with Showjumping Ireland since it was founded and it has been a most enjoyable time in my life.”

Brian Gormley has been the vet in Granard for many years now. He and Anne are very well known and respected in the area.

He sat his Leaving Cert alongside Bishop Colm O’Reilly at St Mel’s College in Longford in 1952 and subsequently went on to study veterinary medicine.

“I qualified as a vet in 1958 and I’ve been working out of Granard every day since,” he added. “My wife Anne and I were honoured by Showjumping Ireland and have been included on their Roll of Honour for 60 years of contribution to the development of show jumping in Ireland.

“Local lad Eddie Macken was one we helped along his way; he later became the country’s best show jumper and indeed one of the best in the world.”

Brian Gormley described Showjumping Ireland’s set up as similar to that of the GAA.

He was on the Leinster Region for over 40 years and served as chairman of the executive on three occasions. In doing so, the local vet is the only man in Ireland to have achieved such status within the show jumping association.

The event at which Mr and Mrs Gormley were honoured at, was a celebration of the 60th anniversary of Showjumping Ireland which occurred last year.

Fifteen people from each of the four provinces - including the Gormleys- were invited to participate and to become honorary members of the prestigious organisation.

In a statement, Showjumping Ireland said that in honour of its milestone anniversary, national chairman Tony Hurley and the National Executive Committee decided to nominate 60 people, who over the years greatly contributed to the success of the association and the sport in general.

“It was an historic day for the association as we honoured those who have given outstanding service and dedication to Showjumping Ireland over the past 60 years.

“This is the first honouree presentation and we look forward to those who will be enlisted to the Roll of Honour over the coming years’’.

Specially commissioned certificates were then presented to each of the recipients.

The Midland Showjumping Championship for Midlands VIVA takes place at the Eddie Macken Arena in Granard on Sunday, July 26. The event is sponsored by C&M Veterinary Supplies.