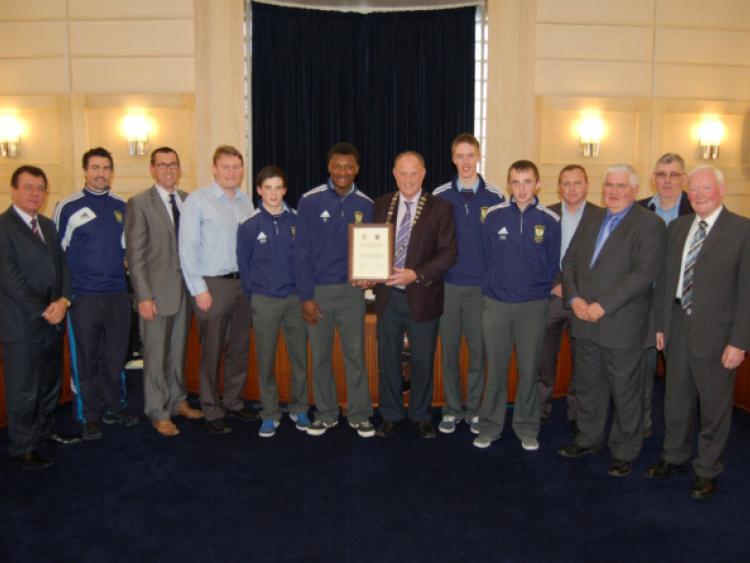 There was more than a sense of mild excitement in the air earlier this week as local politicians held a reception for members of Cnoc Mhuire’s All-Ireland-winning panel.

There was more than a sense of mild excitement in the air earlier this week as local politicians held a reception for members of Cnoc Mhuire’s All-Ireland-winning panel.

Four stars from the Granard school’s Senior ‘A’ squad and their manager James Carolan were on hand to pick up a memento in recognition of their achievements from County Mayor, Cllr Larry Bannon.

And as he welcomed the quintet into the council’s chamber last Wednesday, the Fine Gael representative paid testament to the side’s strength of character in overcoming Tyrone outfit, Holy Trinity in April.

That determination, he said, was evidenced by the Leinster champions having to do without the services of key midfielder Aiden McEligott following his red-card eight minutes before half time.

“It showed the steel that is in the side to not only come out and win it, but to win it in style,” said Cllr Bannon, before turning his attentions to present day refereeing standards.

“To dismiss a fella for a thing of nothing, they (referees) need to cop on. After all, it’s a physical game, a contact sport,” he said.

Cllr Micheal Carrigy, who initially called for the reception to be held, said the school’s continued rise up the GAA ladder was just reward for many months of hard work.

“Cnoc Mhuire is a fabulous school, not just for GAA but for all sports,” he said.

Cllr Frank Kilbride said he too had achieved GAA notoriety in his own playing days, picking up a Leinster Championship medal in 1971.

“Something like this is great for the county, clubs and schools,” he said. “We need county players in Longford.”

The side’s team manager, James Carolan appeared noticeably moved by the barrage of plaudits as he spoke about what he and his fellow mentors regularly try to instil in students.

“The one thing we are very proud of in the school is the spirit and camaraderie that exists,” he said.

“It’s not just about the sport, we try to train them as young adults.”