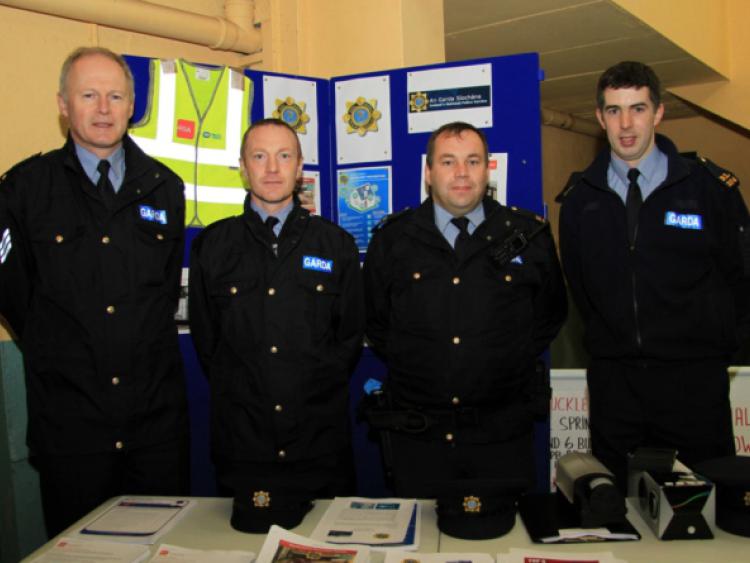 There was an unusual feel to goings on inside the doors of Ballymahon Mart last week-and it had nothing to do with the purchase or sale of cattle.

There was an unusual feel to goings on inside the doors of Ballymahon Mart last week-and it had nothing to do with the purchase or sale of cattle.

Rather, it had more to do with the sight of uniformed gardai erecting a stand in anticipation of a special talk on crime prevention.

The reaction among the waiting farming public appeared largely positive too, some of whom were only too willing to express their take on events.

“Of course it is,” said Vincent Connolly, when asked about the relevance of the morning’s proceedings.

“If it increases awareness then great. It’s no harm to make that phonecall and write the number down.”

His reference to jotting down registration plates and serial numbers was put to the test only last month.

That resulted in Vincent passing on vital information after noticing a suspicious looking character lurking around the property of one of his neighbours.

“I had my electric fence only stolen a week ago,” he candidly revealed.

“I’ve also had a creamery can stolen and the battery taken out of my tractor in the last couple of years too.”

But that’s not all. The mild mannered farming enthusiast told of how a property of his had similarly fallen foul to thieves, culminating in the loss of copper wiring and a cylinder.

“Ah sure there were fingerprints taken and everything, but sure they (burglars) left no marks behind them,” he said.

More pressing though for Tom was his obvious impatience to get proceedings underway.

“I hope it (talk) doesn’t go on too long because I am a director in the Mart here you see,” pausing to note his association dated back more than two decades.

“I just hope they (gardai) don’t break it (auction) in the middle of a farmer having four or five of his cattle being sold.”

An interesting aside to the morning’s exercise was the fact a public meeting on Longford’s apparent upsurge in crime had been scheduled for later that evening.

During our visit last Thursday it didn’t seem obvious the two were in any way linked with officers appearing to focus much of their attention on what farmers can do to prevent crime.

Leading matters was Longford/Roscommon Crime Prevention officer, Sergeant Paul McCormack. He opted to direct much of his ten minute presentation on machinery and trailer related theft.

“In 25 per cent of break-ins, there is no break-in at all. Crime prevention is about making access more difficult,” he said.

What Sgt McCormack and his colleagues will be hoping for now is that those warnings will be taken on board and more importantly put into practice over the weeks and months ahead.