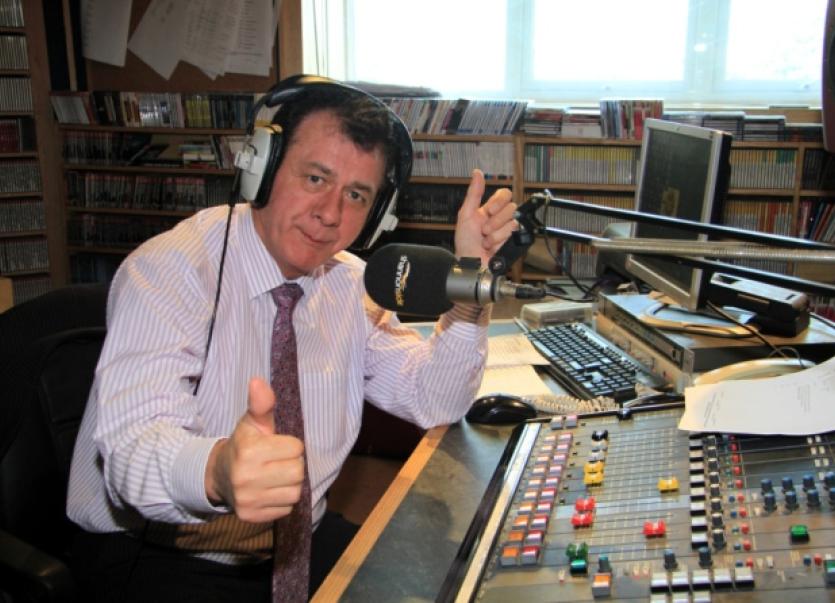 Be it in the world of entertainment, political life or his various other business interests, former county councillor Frank Kilbride is a man who enjoys a high profile across the region.

Be it in the world of entertainment, political life or his various other business interests, former county councillor Frank Kilbride is a man who enjoys a high profile across the region.

Now, and for the first time, the wily entrepreneur has spoken about his own rise to prominence and his own battles against depression and near bankruptcy .

So when the Leader popped round to his modest sized offices inside The Park House Hotel last Friday, it was obvious that this would be no quick-fire interview.

â€œIf Iâ€™m going to tell this story, we have to start from the very beginning,â€ was the husky welcome we received upon our arrival.

The second youngest of four children to Mary Lizzie and the late Michael, Kilbride like many of his peers back then grew up in a country beset by emigration and economic strife.

A student at Bunlahyâ€™s Naomh Guasacht National School, much of his early days were spent doing what he has done all his life - working.

â€œWhen Iâ€™d be finished at school, I used to go home and help my father on the farm,â€ he said, while conceding he wasnâ€™t perhaps â€œthe brightest sparkâ€ when it came to his studies.

â€œDan Kennedy, who was my headmaster in Granard all those years ago told my mother at one stage: â€˜Mrs Kilbride, Frank is doing great. The problem is he has lots of brains, but heâ€™s sitting on themâ€™.â€

Sporting accolades, both in hurling and football highlighted by a Leinster Vocational Schools winners medal in 1971, were attained with pride.

His f irst foray into business wasa far cry from the entertainment world.

â€œMy father used to grow cabbage plants and sell them at fairs in Granard, Ballinamore, Mohill and Longford town.

â€œIt was great meeting people and getting half a crown for a bundle of cabbages,â€ he said, reminiscing of the many times he popped across to â€˜Mrs Reillyâ€™s Barâ€™ in Granard for a Cavan Cola.

Away from the hustle and bustle of daily life, an altogether different side to the youthful Kilbride began to surface.

Musicprovided an outlet, a welcome distraction of sorts from the economic travails of the day.

â€œIt was always in the house,â€ he said, in between taking a deep intake of nicotine.

â€œMy grandmother, Bridget Kilbride used to play the concertina and my grandfather, Frank was a good singer. After that, all I wanted was to get to the stage.â€

Alongside himself, the group featured well known names such as Paschal Flaherty, Ann Fox and Seamus Farrell.

It was also the time he first came into contact with another up and coming star of tomorrow -Declan Nerney who he describes as a â€œseriously talented musicianâ€ .

â€œI knew him from the time I spent at my grandmother, Katie Heaneyâ€™s house in Ennybegs,â€ he said. Later he would manage Nerney for a long number of years.

Back then, he was beginning to mix in serious company and his stock was on the rise.

His big break though would come in 1979 when the music-hungry 25-year-old struck up a friendship with the late music promoter, Peter Sheridan.

In charge of artists like Larry Cunningham and Brian Harkin, Kilbride had what many others in his position simply didnâ€™t-a ready made six piece band with all the latest equipment in tow.

â€œPeter took me and we recorded â€˜My native town Drumlishâ€™ in Big Tomâ€™s Castleblayney studios. It brought me into the picture surely.

â€œIt wasnâ€™t that I was a good singer, we were just a band that were easily enough paid at the time.â€

Soon after, another break would fall his way when plans to send Brian Harkin and his â€˜Plainsmenâ€™ band over for a UK tour fell through.

â€œWe were sent as the replacement,â€ said Kilbride, at this point sitting leisurely back in his chair.

â€œWe played London, Manchester and Birmingham. It couldnâ€™t have gone any better.â€

His rising stock also coincided with snippets of material being aired on Paschal Mooneyâ€™s RTE show â€˜Keep It Countryâ€™.

â€œIt cleaned me. I was putting money into a company that was dead. But I donâ€™t blame anyone, I borrowed the money.â€

â€œI remember we played in the Pikerâ€™s Lodge in Loch Gowna, doing five weddings in a row. We played that many times there I nearly got married myself,â€ he laughed.

His regular treks to carry out functions across the Irish Sea opened many professional doors. One particular friendship stood out above all others.

â€œMatty Lennon and his wife Breege have always been great friends to me and Iâ€™ll never forget that,â€ said Kilbride of the UK based construction giant.

By this stage Kilbride was in charge of Slevinâ€™s of Bunlahy and by May 1986 he took over his â€˜pride and joyâ€™ - The Park House in Edgeworthstown.

With his contacts from the music industry by his side, The Park House soon attracted names like Chuck and June and Jonathan Owens, Declan Nerney, Mick Flavin, Daniel Oâ€™Donnell, Charlie Pride and others.

He took over Edgeworthstown Post Office and ventured into the undertaking business by the early 80s.

The world of local media similarly fell under his wing, a role he has enjoyed for the past 25 years on Shannonside Radio.

More recently, Kilbride started to dabble in TV work, thanks to his â€˜Frank Kilbride Showâ€™ on Sky channel 191.

Not all of his business decisions paid off however. In fact, his ill fated move into Irelandâ€™s booming building trade in 2003 nearly crippled him.

â€œWhen myself and my nephew, Enda (Sheridan) set up business everything went well at the start.

â€œWe built Granardâ€™s first estate, Beechwood and Kilbride Park in Edgeworthstown, but I made a few decisions that cost me.â€

Those â€œbad movesâ€, as he chose to describe them, cost him â‚¬6m to be precise.

â€œIt cleaned me. I was putting money into a company that was dead. But I donâ€™t blame anyone, I borrowed the money.â€

Properties built by his firm which were selling for upwards of â‚¬280,000 were now worth a fraction of their former price.

â€œI blame myself. When the banks were throwing money at me, I took it.

â€œWhat I will say though is no matter how bad things got, the people that I employed always got paid,â€ he insisted.

Not surprisingly, depression began to set in.

â€œMy health did suffer yes. Iâ€™d lost my house, everything. I was in and out of hospital for six months.â€

He says one of his saving graces was the support he received from family and friends including his beloved mother, Mary Lizzie, Mattie Lennon, Billy Faughnan, Fr Colman Carrigy and Patricia Kelly.

The other was his faith.

â€œMy family and friends did everything they could for me, but it was prayer that pulled me out of the gutter.â€

Earlier this month, the former county councillor made good on that promise by successfully acquiring, with the help of a syndicate, The Park House Hotel at a public auction in Dublin.

Kilbride has also not ruled out a return to the political scene.

One of the big name casualties to lose his seat in the local elections, last month he held the first of a series of meetings aimed at addressing Edgeworthstown and Granardâ€™s so-called â€˜democratic deficitâ€™.

And in a further twist this week, he confirmed for the first time his intention to run as an Independent candidate in the next general election.

â€œAn old man from Co Cavan once said to me you could live three lifetimes and maybe the third time you might get it right. If I can do that, I will be doing okay.â€