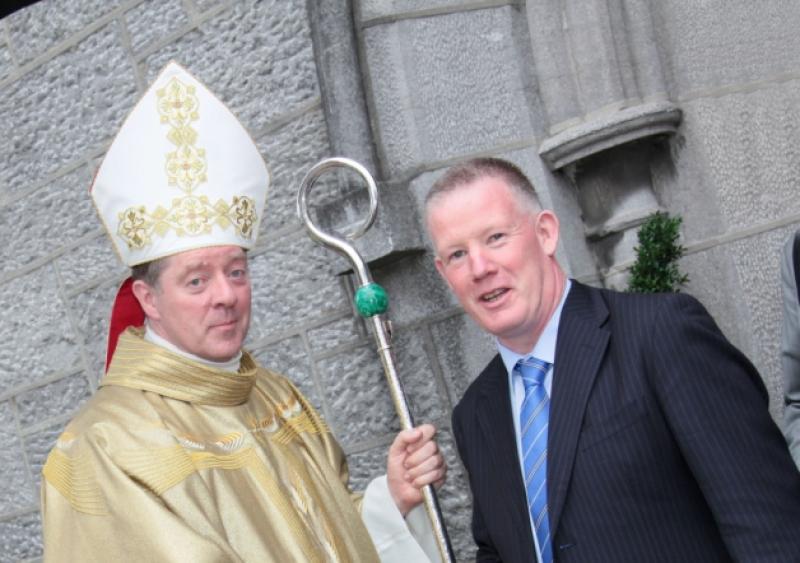 The final phase in the protracted but pionereering restoration of St Mel’s Cathedral is “in good hands”.

The final phase in the protracted but pionereering restoration of St Mel’s Cathedral is “in good hands”.

Those were the confident words put forward by Bishop Francis Duffy as he formally took over as the Diocese of Ardagh and Clonmacnois chief prelate on Sunday.

He said a recently held open day attended by over 4,000 people was evidence enough of the progress made by designers and Project Committee leaders.

“The mood was different,” he conceded, referring to a similar open day two years earlier held not long after the building had been destroyed by fire.

“(It was) more upbeat and hopeful because progress was visible and a restoration in sight.”

Working in the Diocese of Kilmore for over three decades, Bishop Francis is from the Cavan parish of Templeport.

One of a four children, his father, Frank passed away some years ago, but his proud mother Mary and close family members were there along with around 400 others inside a packed St Mary’s Pro-Cathedral in Athlone to witness his ordination on Sunday.

A past student of St Patrick’s College in Cavan, Bishop Francis returned to his alma mater as a teacher following his ordination in June 1982.

By the autumn months of 1996, the chance of progression came calling once more, this time as principal of Fatima and Felim’s Secondary School, Ballinamore, Co Leitrim.

Bishop Francis’s spell in charge lasted over a decade before he found himself on the move again.

Whereas his previous assignments were largely education-based, his next duty was arguably his most challenging to date. That came in 2008 when his appointment as Diocesan Secretary and Chancellor was confirmed.

It was also a period of gradual change in the Kilmore Diocese, and one which saw the arrival of a new Bishop, Leo.

As is often the case within dioceses, the need to shake-up and transfer priests from one parish to another presented itself just a year later.

He took over in the parish of Laragh , just outside Cavan town and was working there at the time of his appointment. His appointment, which was confirmed on Sunday, sees him move to the diocese of Ardagh and Clonmacnois following the redecoration of the Bishop’s Palace in Longford.