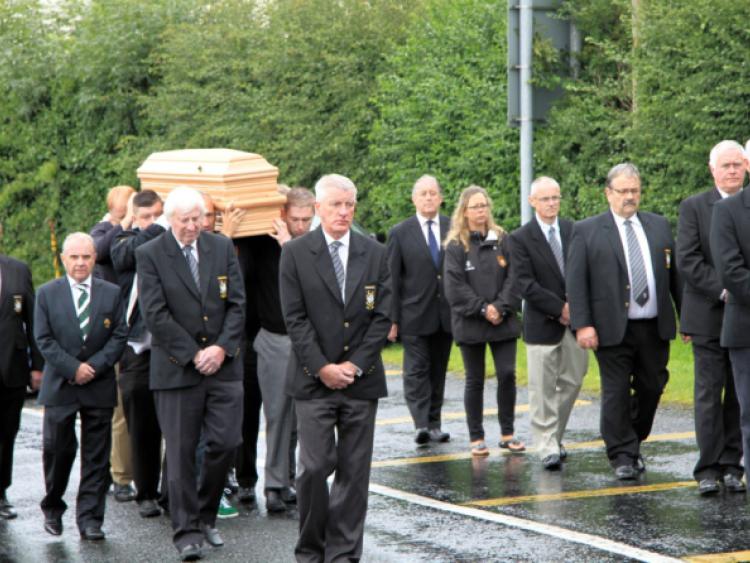 St Mary’s Church in Newtownforbes was overflowing with mourners on Sunday afternoon as they came to pay their final respects to legendary rugby figure and highly respected Longford town business man, the late Hugh Connolly who died suddenly on Thursday, August 7.

St Mary’s Church in Newtownforbes was overflowing with mourners on Sunday afternoon as they came to pay their final respects to legendary rugby figure and highly respected Longford town business man, the late Hugh Connolly who died suddenly on Thursday, August 7.

IRFU President Pat Fitzgerald and Longford RFC members formed a solemn guard of honour as Hugh, who made an immense contribution to youth and adult rugby affairs not only in Longford but throughout the region, was laid to rest at Newtownforbes cemetery following 1pm Mass of the Resurrection.

Paying tribute to Hugh, Longford RFC’s Tommy Butler wrote, “It is hard to sum up the amount of good work that Hugh did in Longford RFC especially at Youth Level and in general in the community of Longford.

“Needless to say that the void Hugh leaves behind and the legacy of good will and good work in Longford RFC and in Longford Town in general is massive.”

“He will be sadly missed by all members both Underage and Senior in Longford RFC and in the Leinster Branch where he was Longford’s Underage and Adult Representative along with organising Youth competition on a province wide basis.”

A minutes’ silence was observed in memory of Hugh last weekend to honour his massive contribution to Leinster underage rugby prior to the clash between the Leinster U-18 Club side and the Exiles.

Hugh was regarded as an astute bridge player and he possessed great business acumen. CPF (Profiles) Ltd was founded in 1979 to fill a void in the market for true concrete portal frames. The company, who sponsored the County Longford Ploughing Championships for a number of years, entered the cladding market in 1990, providing products for both the industrial and commercial sectors. And in a highly competitive market, Hugh’s vision saw CPF diversify resulting in constant growth.

Many Facebook tributes poured in for Hugh. Marc Diffley described him as “an unbelievable character and an invaluable contributor to Longford rugby. Above all, a gentleman.” Séamus Ó Méachair added, “What a gentleman and a huge presence in the community of Longford. His work with young people in both the rugby and the Attic Youth Cafe was immense!”