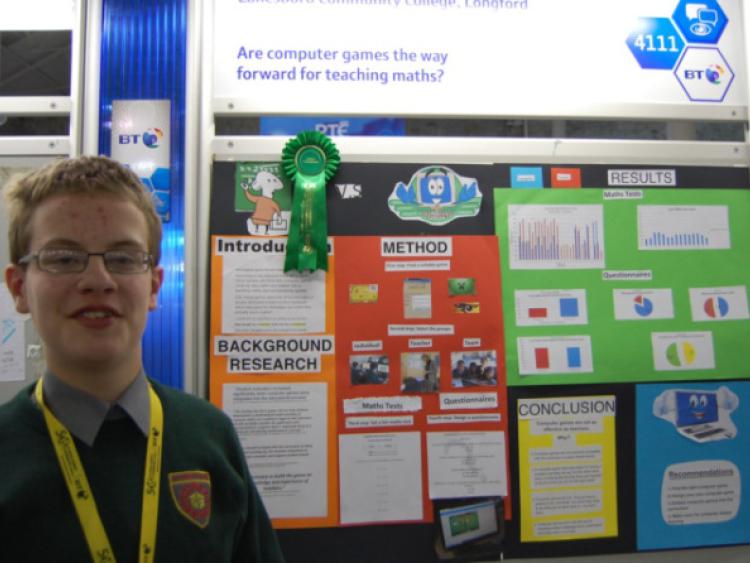 A first year student of Lanesboro Community College was among the winners at the 50th BT Young Scientist and Technology Exhibition.

A first year student of Lanesboro Community College was among the winners at the 50th BT Young Scientist and Technology Exhibition.

Brian Lyons presented his project “Are computer games the way forward for teaching maths?” at the exhibition, which was held at the RDS, Dublin last week.

The Lanesboro student worked hard on his project, carrying out extensive research before undertaking experiments. In one such experiment, Brian compared results when the same maths lesson was taught to separate groups by a computer game and a teacher. Brian was highly commended in the junior individual category for his work.

Speaking to the Leader after the exhibition, Biology teacher and Deputy Principal of Lanesboro Community College, Michael Lyons said: “It was a great success for a school or our size to come away with an award”, adding that it was a great experience for all the students involved.

Commending the students for all their hard work, Mr Lyons was also quick to praise parents for their support throughout the process.

Mr Lyons is also grateful for the level of support from the community and the surrounding areas, with many travelling to Dublin to visit the exhibition.

Brian’s project was just one of four from Longford chosen for the exhibition.

Will Dennigan and Daniel O’Reilly, also from Lanesboro Community College, were chosen for their projects “The probabilities of chance” and “The perception of iPads in Irish Education” respectively, while Patrick Farrell and James Gavigan from Ballymahon Vocational School presented their project “The Anti-Alcos”.

Mr Lyons explained that this was the Lanesboro school’s 14th year to get involved with the exhibition and that this year’s projects were “fascinating across the board”. He also happily reported that there was plenty of interest shown in the school’s other two projects.

Though thrilled with the results, Mr Lyons concluded that a lot needs to be done to help more rural schools to continue to develop, adding that links with third level institutions are vital.