Remembering the life and times of Albert Reynolds 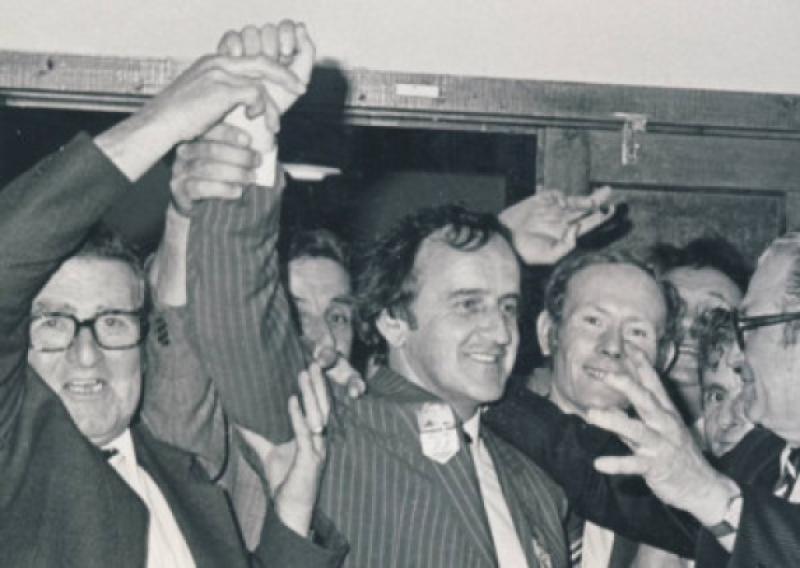 Albert Reynolds died this morning at the age of 81. He was born on 3 November 1932 in Roosky, County Roscommon, the youngest of four children. He was educated at a local national school and attended Summerhill College in Sligo.

Albert Reynolds died this morning at the age of 81. He was born on 3 November 1932 in Roosky, County Roscommon, the youngest of four children. He was educated at a local national school and attended Summerhill College in Sligo.

After brief stints as a junior clerk and a cabinet polisher, he took up employment as a clerk with Bord Na Móna in 1952. As a new entrant he was stationed in Kildare and it was during this time that his life long love of horse racing began. Deciding to study at night and taking a correspondence course in accountancy, Reynolds was soon offered a permanent post closer to home with CIÉ as a Clerical Officer in Dromod, Co. Leitrim. Before long Reynolds was promoted to the CIÉ Accountancy office in Ballymote and it was from here that he had cause to visit the office of a client, McGettricks Outfitters, where he first met Kathleen Coen. The two began dating, and even though Reynolds was transferred to Longford this did not hamper the relationship.

It was during this time that Reynolds began to see the need for purpose-built dancehalls where people could meet and mix. Teaming up with his brother Jim, they constructed their first ballroom, the Cloudland in Roosky. With electricity, polished floors, changing areas, toilet facilities and a capacity of 2,000 people, it was a game-changer in the industry.

As the showband era took off, so too did the business, with a string of 14 ballrooms opening across the country. In June 1962 Albert married Kathleen and they settled down in Longford. They would have seven children: Miriam, Philip, Emer, Leonie, Albert (Abbie), Cathy and Andrea. A new house at ‘Mount Carmel’ in Longford was bought from the proceeds of one particular event, when Reynolds booked an unknown Kenny Ball to play for 10 consecutive nights, by the time the concerts came, Ball had had a number One hit with ‘Midnight in Moscow’ and was a sensation at the time.

By 1966 Reynolds sensed a changing mood in the industry and decided it was time to move on, selling his remaining interests to his brother Jim. Having always had a healthy interest in politics Reynolds got to know many key figures during this time. One of these was Neil T Blaney, who encouraged Reynolds to become part of his ‘by-election task force’ and it was here that Reynolds learned how to run and organise campaigns.

Reynolds and a team of local entrepreneurs were quick to lobby Blaney for support for an ambitious new project. With his support and huge fundraising activities, Ireland’s first indoor heated swimming pool was opened in Longford.

Reynolds sought out new areas of business and bought a bacon factory in Dublin, a share in the Odeon Cinema in Longford, the Longford News newspaper, and a hire-purchase car company.

It was in 1971 that Reynolds started a new business, having spotted a gap in the Market. C&D pet foods was established and went on to become a major player in the trade in Ireland and the UK, and a significant employer in the Longford region. In 1972 Reynolds served as President of Longford Chamber of Commerce and was crucial to the establishment of Longford Aviation Airfield Development Ltd., the company that would oversee the development of an airfield in Abbeyshrule.

Reynolds was elected as a local councillor in 1974, topping the poll. As the 1977 election approached Reynolds again broke the mould by defeating Frank Carter, the sitting Fianna Fáil TD (who had taken over the seat from his father), for the FF nomination. Reynolds proved a highly popular choice as candidate and was elected with ease.

With an ever worsening economic climate, Reynolds lent his support to Charles Haughey, who came to power in 1979 promising a new approach. Reynolds was to receive his first Ministerial appointment as Minister for Post & Telegraphs; he quickly proved his worth and, though serving only 2 years until the next election, he had an enormous impact on the sector.

Reynolds was comfortably re-elected in 1981 and 1982 and was appointed Minister for Industry and Energy in a government that would only last 9 months. In the short time available to him, Reynolds again proved very effective, particularly in the laying of a new gas pipeline from Cork to Dublin. But serious challenges emerged to Haughey’s leadership, and while Reynolds backed him it was at this time that he also warned him that it was the last time he could do so as the arguments were destabilising.

After a period in opposition, Fianna Fáil returned to government in 1987. Haughey offered him the post of Minister for Forestry and Tourism, telling him Ray Burke wanted the Industry and Commerce portfolio. Reynolds, disagreeing with Burke’s appointment, turned down his own opportunity to serve, and within two days Haughey reversed his decision and made him Minister for Industry and Commerce. As minister in this portfolio, Reynolds teamed up with Padraic White of the IDA to lead a drive to secure US Investment in Ireland. When Ray McSharry was appointed EU Commissioner in 1988, Reynolds was promoted to Minister for Finance. During the following years he cut taxes more than any other minister in the history of the state. This was also mirrored by strict controls on public spending. A coalition government with the Progressive Democrats was formed in 1989, and while Reynolds was involved with the negotiations, he was opposed to working with the PDs. Reynolds continued as Finance Minister and became well regarded across party lines during his tenure.

In 1991 the relationship between Haughey and Reynolds broke down irrevocably and Reynolds was sacked as he backed a no confidence motion in the leader. However, less than three months later, continued scandals surrounding Haughey caused his resignation and Reynolds was elected Leader of Fianna Fáil and Taoiseach. His first act was to completely revamp the party’s front bench bringing forward many new faces. He also sacked a number of high profile cabinet members, such as Ray Burke and Mary O’Rourke.

Reynolds’ tenure as Taoiseach was busy and immediately he was forced to deal with the ‘X’ Case and abortion legislation. The government put three referendums to the people on this issue, and won two but lost on the substantive issue surrounding the constitutional wording. The Maastricht Referendum was also passed during this time.

The personality clashes and distrust in government were too great, however, and when Des O’Malley and Reynolds clashed at the Beef Tribunal, the government fell. The 1992 election was a bad result for Fianna Fáil, losing 10 seats and taking the blame for what many saw as an unnecessary election. Reynolds surprised everyone, however, by forming a new government with the Labour Party. During this time, Reynolds saw the economy start to grow and secured a record investment of EU funds into Ireland. This would combine with his work on Northern Ireland, where Reynolds first secured the Downing Street Declaration and later, against all the odds, he secured the IRA ceasefire in 1994.

In November 1994 the government reached crisis point. Relations between the parties became strained over the preceding months, and while the government came close to collapse over Reynolds’ assertion that the beef tribunal ‘vindicated’ his integrity, they had struggled along. A row over the appointment of the president of the High Court led to the collapse of the government in some quite bizarre circumstances. Reynolds resigned as Taoiseach and the Labour party formed a new government with Fine Gael.

Reynolds was encouraged by Bertie Ahern to stay on as a TD in the 1997 election with a view to becoming a presidential candidate. However, in the 1998 Fianna Fáil presidential nomination battle Reynolds was defeated by Mary McAleese.

He retired from politics before the 2002 election and published his autobiography in 2009.