‘Beautiful’ and ‘courageous’ Deputy Nicky McFadden is laid to rest 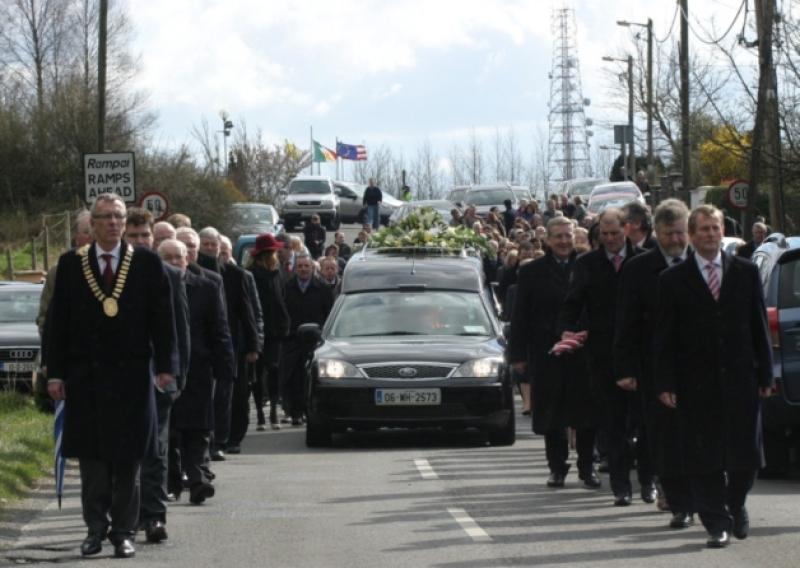 “We have lost a beautiful woman with a beautiful mind and a beautiful heart”, Taoiseach Enda Kenny said of the late Deputy Nicky McFadden.

“We have lost a beautiful woman with a beautiful mind and a beautiful heart”, Taoiseach Enda Kenny said of the late Deputy Nicky McFadden.

The Taoiseach was speaking at the graveside of the 51-year old Longford/Westmeath deputy who lost her battle with Motor Neurone Disease last Tuesday week.

A clearly emotional Mr Kenny added, “Many of us here feel bereft at her leaving us, as a colleague, as a friend, as a neighbour, as a member of the Fine Gael party who served her constituents with dignity, with integrity, with care and with consideration”.

During her Funeral Mass, Fr Declan Shannon spoke of the late TD’s bravery and her endless acts of goodness.

“It is the words of Saint Paul writing to his friend Timothy in the second reading that probably best sum up Nicky’s life with these words,” he said, adding “‘I have fought the good fight. I have finished the race. I have kept the faith’.

“Nicky McFadden has indeed fought the good fight of life with all the determination she could muster.

“She has finished the race, that may not be long in terms of years but was long in terms of giving. She has surely kept the faith, right up until the last moment, when having received God’s anointing of the sick and gift of absolution, she gently ‘let go’ to God.”

The Longford priest went on to talk about the day of judgement and the importance of a person’s good deeds when that final day arrives.

He continued. “We hear the words of Jesus himself who said, ‘In so far as you did this to one of the least of these brothers or sisters of mine, you did it to me’.

“Nicky did many deeds of kindness and goodness, decency and generosity that many of us may never know about, but God knows about.

“No act of kindness or goodness, decency or generosity, however small will ever escape the notice or attention of God. Determined that Motor Neurone wasn’t going to define her, Nicky fought it with every fibre of her being, but slowly accepted the gradual limitations it brought.

“Surrounded by the great love of family and the loyal support of good friends, Nicky knew she was not on her own and neither was she. Even in her sickness, Nicky has left behind some incredible and precious memories.”

Deputy McFadden was elected to the Dáil for the Longford/Westmeath constituency in the 2011 General Election and became the first female Fine Gael TD in Westmeath.

She was first elected to Athlone Town Council in 1999, when she topped the poll and in 2003 she was co-opted onto Westmeath Co Council, when her father, Brendan McFadden, retired.

She unsuccessfully contested the 2007 general election, but entered the Seanad in September of the same year. Born in Athlone in 1963, the late TD was educated at St Joseph’s College Summerhill. She went on to do a diploma in legal studies.