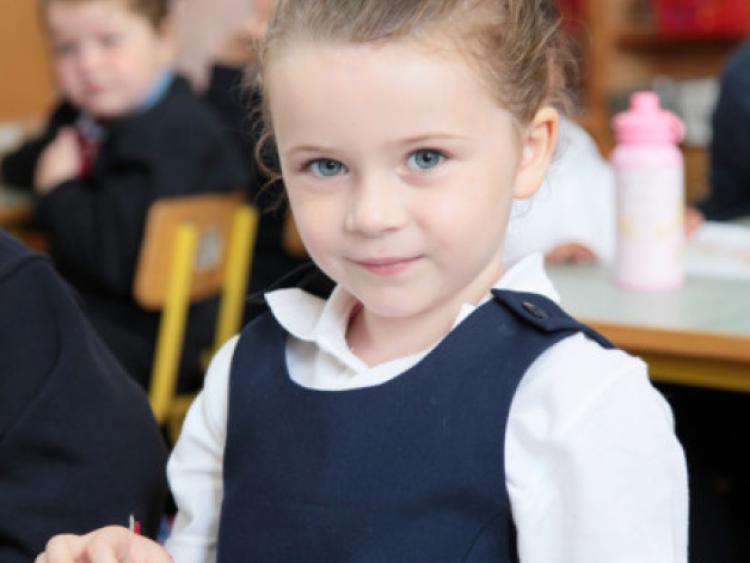 Over the past week, parents have been saying tearful goodbyes to their little angels as they drop them to the school gates for the first time.

Over the past week, parents have been saying tearful goodbyes to their little angels as they drop them to the school gates for the first time.

The students of St Joseph’s National School, Longford, and St John’s National School, Edgeworthstown, were too preoccupied with the importance of colouring and making new friends to be too perturbed by the changes that school life brings.

For Liam, Jasmine, Lucy and John, the Junior Infants class of St John’s, the school year brings on prospects of lots of colouring-in, playing and generally, a lot of fun. All four children said they love their school, and each named their favourite thing in the classroom. When posed with this question, John preferred the toys, whereas Liam had a look around for a moment, before proudly proclaiming “my lunch”.

“I’ve been very good” Jasmine explains earnestly. Jasmine adds that she loves to paint, a hobby also shared by Lucy, who loves to make handprints.

Over in St Joseph’s, rather than four students, there are four classes of Junior Infants, all eager to get started with their education.

For Margel, the best thing about school is drawing, while Rihanna enthusiastically exclaims that learning and colouring in are her favourite activities in school. Kamil agrees with Margel, adding that he loves to draw big red monsters!

Just a few days into their big adventure, the children seem to have settled in well, with new friendships already forged and exciting prospects of learning new things, playing in the schoolyard and PE in the big hall ahead.

Most students were only too happy to immerse themselves in the activities carried out at school, be it arts and crafts, dressing up, playing with sand, or reading their favourite books. The students were also thrilled with the idea of talking to, and having their photo taken for, the Longford Leader, all smiling brightly for the pictures they are excited for their mammies and daddies to see.

However, after a few moments, it was clear that school work was top priority, with one boy eager to get back to the task at hand. “I’m finished talking to you now” he announced, adding “you can go”, before selecting an orange crayon with which to colour in his clown picture.