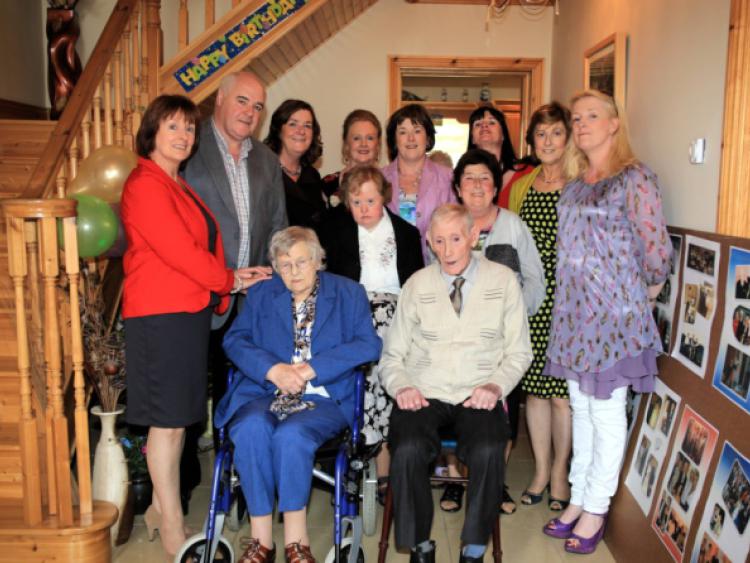 As characters go, Packie Keogh is right up there with the very best of them.

As characters go, Packie Keogh is right up there with the very best of them.

Jovial and talkative, it was perhaps of little surprise the likeable north Longfordian was the centre of attention when the Leader called to his door last Saturday evening.

And why not? After all, it was the eve before he joined Longford’s exclusive club of centurions as family members rallied round their beloved Packie.

Sitting in the front living room of his daughter Margo and son-in-law Sean Campbell’s home in Aughnacliffe, out stretches a welcoming hand and the gentle whisper: “Your very welcome.”

It was a gesture that summed up the man, a man who you just knew had encountered and conquered most of what life had thrown at him.

“But they were tough times,” he said, referring to his early upbringing as one of eight children to parents James and Bridget Keogh in Ohill, Drumlish.

The family home back then was typical to its time. Small and humble, it had just two sleeping rooms and a kitchen.

After a short stint attending Ennybegs National School, Packie, like many of his peers had little option but to try and earn a wage in order to put food on the family table.

By the age of 13, he was out picking potatoes. At one stage he recalled handing his entire weekly wage of 10s to his mother so she could buy a 10st bag of flour.

As he entered his mid teens, Packie went to work for his uncle, repairing Ballinamuck National School before later going on to work for Longford County Council.

As his wage earnings increased (up from 10s to £3,6s), so did his love of attending dances. His appearance at one such event would ultimately end up in Packie meeting his future wife, Mary Ellen Feeney.

Recounting their marriage in 1951, Packie smiled when asked if it was love at first sight: “Yes it was,” came the assured response.

“He’s a great man,” he said. That same assuredness is evident when the topic switches to Ireland’s economic malaise.

“We’ll never get out of it. They (banks) gave it (money) out but didn’t think how they would get it back,” he said.

A well-worn viewpoint it maybe, but its one the genial father of one clearly abides by. Another is the secret behind his unerring longevity: “I never worried, I worked hard and I never drank,” was his straight and forthright reply.

Food for thought for us all, perhaps.